The UNHCR asked neighbouring countries to keep their borders open to Afghan refugees. 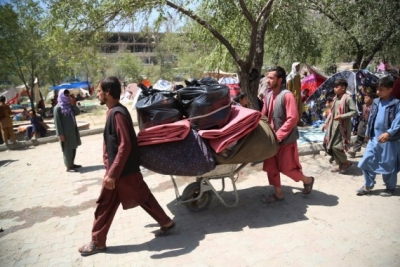 in the wake of the Taliban takeover, the UN Refugee Agency (UNHCR) has estimated that some 500,000 Afghans are likely to leave the war-torn country in the next four months.

As Taliban has been implementing its own set of rules and laws, the people in Afghan fear unemployment, poverty and threat to their lives. They say their lives have entirely changed since the day Taliban took over. "We were staring at an uncertain future, the women can't step out of their homes neither can they work. The life had become a living hell under Taliban", says Afghan people who had migrated India recently.

In a statement issued recently, UNHCR said that the political uncertainty following the collapse of the former government to the Taliban in mid-August will force people to start a mass migration, TOLO News reported.

"While we have not seen large outflows of Afghans at this point, the situation inside Afghanistan has evolved more rapidly than anyone expected," said Kelly T. Clements, deputy high commissioner.

The UNHCR asked neighbouring countries to keep their borders open to Afghan refugees.

Meanwhile, the World Food Programme (WFP) has asked the UN to provide the organization with $12 million to provide food for in-need Afghans.

A number of residents say that the political uncertainty, unemployment and security issues have forced them to leave the country.

Habibullah's family is one of thousands of families waiting outside Kabul airport hoping to leave the country.

"I worked for four years with the foreigners, but now I am jobless. I heard rumors that the Taliban are searching houses for people who worked with foreigners and killing them. I have to leave the country," Habibuallah told TOLO News.

"Unemployment and security threats have forced us to leave the country to save our lives," said Ezatullah, Habibullah's son.

A number of Afghan women say that they are facing an uncertain future. They say they have studied and worked hard but do not know what is going to happen to them.

Also read: Biden warns of another 'highly likely' attack on Kabul airport in next 36 hrs

"We accepted challenges and studied in Afghanistan. Now we do not know what will happen to us. I am worried about the future of girls in the country," said Rahila, a Kabul resident.