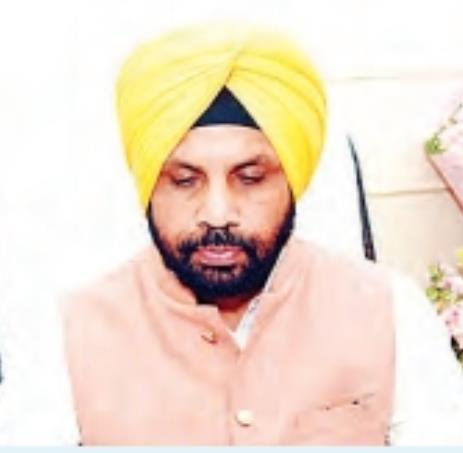 Power Minister Punjab Sh. Harbhajan Singh  visited 1980 MW Talwandi Sabo Power Ltd. (TSPL), coal based thermal plant (3x660 MW) situated at village Banawala, Distt. Mansa here yesterday. This was informed by a PSPCL spokesman here today in a prèss note.
Sh. Harbhajan Singh  Power Minister expressed serious concern over  the repeated outages of TSPL units due to boiler snags. Minister said that last year also TSPL could not ensure availability of all units, so now authorities of the TSPL  have been directed to maintain availability of all the three units throughout the summer and paddy season so that the consumers of the State do not face any power shortage. TSPL was also directed to start generating power from its Unit no. 2 presently under planned annual overhauling till 15.05.2022,  at the earliest, so as to ensure uninterrupted power supply to the state consumers.
Power minster inspected  coal stock at site and directed TSPL to ensure sufficient coal for running all units especially during paddy season lest the state is constrained to take penal action against the firm.
Further, he added that the temperature this year broke all records making this March India’s hottest in 122 years since 1901. The extreme heat & sweltering weather continued unabated in April-2022. Due to the dry season & intense heat waves, temperature in the state has crossed 46ºC resulting into unprecedented power demand in the month of April-2022 in comparison to last year’s.  Such intense heat in the Northern Region coupled with coal shortage prevailing in the country has resulted in scarcity of power available in the exchange. Due to this the country has been facing peak shortages. PSPCL was managing this difficult situation till 26.04.2022 and was providing adequate supply to all sections of consumers. However, during the midnight of 26.04.2022, an outage of more than 850 MW i.e. 660 MW from TSPL Talwandi and 210 MW from Ropar Thermal Plant on fault, worsened the situation.  Now Ropar unit no 6 & TSPL unit no 3 are generating full load. Ropar Unit no. 5 under overhaul has also started generation. From 1st May, 300 MW more power that was being supplied for banking, has  become  available for local supply.
Despite such scenario, PSPCL has catered to peak demand of 9986 MW on 30-04-2022 from all its resources in comparison to 6860 MW of last year. PSPCL supplied  on average 6821 MW  during the month of April 2022 which  is 32% more than monthly average of 5162 MW supplied during April 2021.To meet this increased demand, PSPCL has purchased 305 MUs at more than Rs.11 per unit in the month of April 2022 against only 177 MUs purchased in 2021 at Rs 3.48 per unit.
Minister said that supply position in the state has improved considerably and regular supply to all AP and other consumers is being given for last 2-3 days.