Congress sources say that Sonia Gandhi has told party leaders that Prashant Kishor will be involved and he will work to strategize for the 2024 general elections. 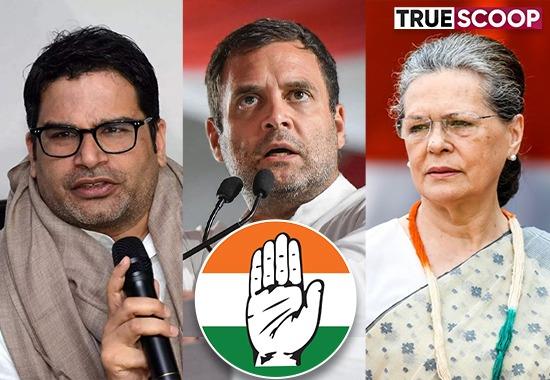 No official announcement has been made about election strategist Prashant Kishor joining the Congress, but sources say that his entry has been decided.
Congress sources say that Sonia Gandhi has told party leaders that Prashant Kishor will be involved and he will work to strategize for the 2024 general elections.
But this time he will not be just an outsourced advisor but will work as the leader of the party. Sonia Gandhi has had three meetings with PK since Saturday.
Many senior leaders including Priyanka Gandhi, Kamal Nath, Digvijay Singh, KC Venugopal and AK Antony were present at these meetings.
Not only this, Rajasthan CM Ashok Gehlot and Chhattisgarh Chief Minister Bhupesh Baghel also met Sonia Gandhi on Wednesday. It is believed that in this meeting, Sonia Gandhi has told the leaders of both the states that PK is coming to the party.
Also Read: Prashant Kishor to join Congress? Meets with Sonia Gandhi, other leaders; discusses Roadmap for 2024
Prashant Kishor may be entrusted with the strategy of the assembly elections. Perhaps that is why both the Chief Ministers were called by Sonia Gandhi.
After the meeting, Rajasthan Chief Minister Ashok Gehlot has also said that the experience of a strategist like Prashant Kishor will be beneficial for the Congress.
Advice is given to strengthen narrative and image building
Congress sources say that PK gave a PowerPoint presentation of 52 slides in the meeting. In this, he told through 18 slides what could be the communication strategy of Congress.
Apart from this, it has also been told in which states the seats can be increased, where it will be appropriate to ally and where the party needs to start the work on its own.
Apart from this, he also talked about the aspects related to the image building and narration of the party. Prashant Kishor said that Congress will have to change its image and work on narration.
PK can become party general secretary, which will fulfil Ahmed Patel's shortage
Sources with knowledge of the whole matter say that PK can be given the role of party general secretary. They will work on strategy and alliance.
It is being said that Ahmed Patel and Motilal Vora, who were political secretaries of Sonia Gandhi, had a good understanding of strategic matters.
Now the Congress leadership can move forward with the help of PK to fill their shortfall. It is being said that Prashant Kishor will look after the strategy for assembly and Lok Sabha elections.
Apart from this, he will establish a dialogue with the in-charge of the states and prepare a strategy.