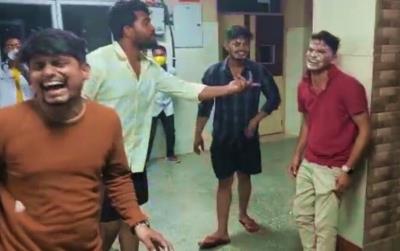 The video clip went viral on the social media this morning shows a group of men creating a ruckus and indulging in a mock belt-fight. Sources said that the birthday was celebrated at midnight on Sunday and the ruckus continued for almost an hour, disturbing the patients. Some people can be seen with cake smeared on their faces.

Civil hospital director Dr Anand Ojha said that the video has been brought to his notice and the matter is being investigated.

"We are trying to identify the people seen in the video and strict action will be taken against them," he said.

Meanwhile, the deputy chief minister said that action will be taken as soon as the report is received by him.