The first picture came from Jama Masjid in Delhi, where a large number of people started shouting slogans after Friday prayers. In their hands were posters with pictures of Nupur Sharma and Naveen Jindal. Author : Rohit Gupta 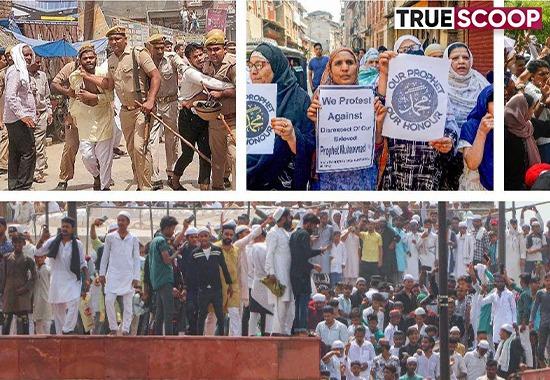 The ruckus over Nupur Sharma's remarks on Prophet Mohammad is not taking its name to stop. On Friday last week, there was fierce violence in Kanpur on this issue and the UP government was very cautious about it. In UP, more or less peace remained except in Prayagraj and Saharanpur, but there were protests in other states of the country.
Its first picture came from Jama Masjid in Delhi, where a large number of people started shouting slogans after Friday prayers. In their hands were posters with pictures of Nupur Sharma and Naveen Jindal. And their demand was that strict action should be taken against Nupur Sharma and Jindal. The Shahi Imam of the mosque, however, denied any connection with the demonstration.
The situation deteriorated in Prayagraj, and protests in Saharanpur too
Apart from Delhi, a large number of people took to the streets in the Saharanpur of UP and Prayagraj, but the situation remained like in Kanpur. People who took to the streets in large numbers demonstrated violently in Prayagraj and also started pelting stones. Intermittent stone-pelting continued through the narrow streets.
Even the IG got injured in this stone-pelting. Apart from this, in cities like Lucknow, Firozabad and Kanpur, the police remained very alert and due to this, there could be no disturbance. Apart from UP,  there have been fierce demonstrations in Howrah in Bengal, Ranchi, the capital of Jharkhand.
Also Read: Situation under control', says Delhi Police over Jama Masjid protest
In Ranchi too, there are reports of several policemen getting injured in the attack by the protesters. Not only this but huge crowds were also seen on the road in cities like Ahmedabad in Gujarat.
Crowds took to the streets in Hyderabad and Kolkata too
A large number of people also took to the streets in the Park Circus area of ​​Kolkata and Charminar in Hyderabad. Apart from this, people also demonstrated in Srinagar, Kashmir, demanding action against Nupur Sharma. In Navi Mumbai, Maharashtra, a large number of women also took to the streets and demanded strict action against Nupur Sharma. However, it was a matter of relief that the situation did not become uncontrollable at any place and the administration handled the situation.
There was already strictness in UP and surveillance was being done with drones since morning. At the same time, a large number of police forces were deployed on the roads so that any kind of disturbance could be stopped.
Home Ministry had issued alerts to the states in advance
Meanwhile, there is news that an alert was already issued by the Union Home Ministry to all the states that there could be demonstrations on Friday. Significantly, since the violent protests and stone-pelting in Kanpur last week, it was feared that the situation could worsen once again the next Friday.
It is worth noting that this matter had also become the subject of discussion at the international level. Many Islamic countries including Qatar, Saudi Arabia, Iran, Malaysia, Bahrain, and UAE had raised objections to this issue. Many countries had even summoned the Ambassador of India on this.
The effect of the poster going viral on social media
A poster was becoming increasingly viral on social media for a few days, in which there was talk of a Bharat Bandh on June 10 in protest against the remarks on Prophet Mohammad. This announcement was not from any big organization, but it is believed that due to this viral post on social media, such a large number of people had gathered in all the cities of the country.