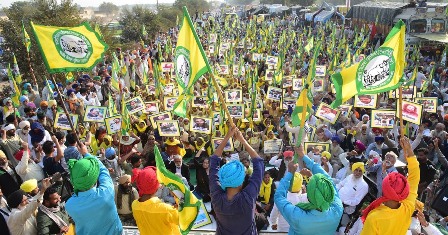 In a significant decision, the Captain Amarinder Singh led Punjab Cabinet on Thursday gave ex-post facto approval for jobs to 104 legal heirs of farmers/farm labourers who have died during the ongoing agitation against the Centre’s black Farm Laws, with the Chief Minister directing the concerned departments to give any further relaxations needed to ensure that the next of kin of all such deceased protestors are provided employment.

The Chief Minister made it clear that he wanted the family members of all Punjab farmers sacrificing their lives in the stir against the draconian laws to be accommodated in government jobs.

The Cabinet earlier authorized the Chief Minister to make any further changes in rules, while approving relaxations to candidates who were not covered under the Punjab government policy dated November 21, 2002, relating to compassionate appointments. The said policy is applicable to Government employees and those persons who have died fighting for the security of the nation. The cases of the legal heirs of farmers/farm labourers who have died during the farmers’ agitation against the Farm Laws were not covered by the policy, necessitating approval/relaxation.

With the cabinet decision, the deceased farmers’/labourers’ mother, father, married brother, married sister, married daughter, daughter-in-law, grandson, granddaughter, Next of Kin (NoK) etc., as recommended by the concerned DC, would be eligible for employment as a one-time measure.

The Committee had, on July 26, 2021, considered the cases of 104 candidates and recommended employment to the eligible candidates. In this regard, a letter has been issued by Revenue Department.

It may be recalled that, in the midst of lockdown due to the Covid-19 epidemic, the  three laws/ordinances were passed by the Government of India on June 5, 2020, which caused a huge outcry among the farmers/farm labourers across the state. Organized protests/agitations by farmers/farm labourers first started in Punjab and then the agitation assumed a nation-wide anger. A large number of small and marginal farmers took part in this agitation. The farmers are still agitating on the borders of Delhi.

Also Read: Punjab permits industry to use paddy straw as fuel in boilers to claim incentives