This raid is being carried out by the CBI officials in over 10 locations in connection with the excise policy case. 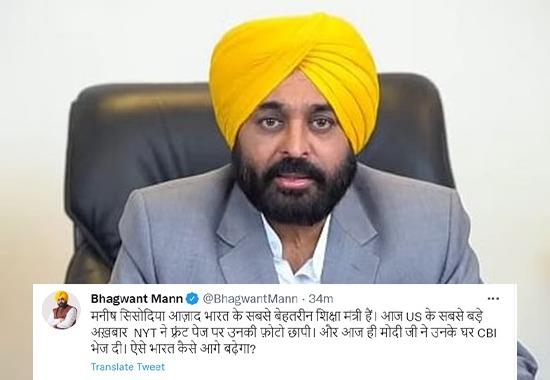 A team of officials of the CBI reached the residence of Deputy Chief Minister of Delhi, Manish Sisodia on Thursday morning in order to carry out a raid. The CBI officials are carrying out this raid in over 10 locations in connection with the excise policy case.

After this whole incident, Aam Aadmi Party Chief went to his Twitter handle and tweeted that the day on which the Delhi Education Model was praised and Manish Sisodia’s picture was printed on the front page of America’s largest newspaper, the same day CBI was sent at his residence.

After this tweet the CM of Punjab, Bhagwant Mann also tweeted that Manish Sisodia is one of the best Education Ministers. CBI was sent by the central government when a photo of him was printed in US’s largest newspaper. At last, he raised the question of how will India progress if we keep on doing these things.

After the CBI officials arrived at the doorstep of Manish Sisodia’s residence he said, “CBI has come. They are welcome. We are extremely honest and are making the future of millions of children. It is very unfortunate that those who do good work in our country are harassed like this. That is why our country has not yet become number one.”