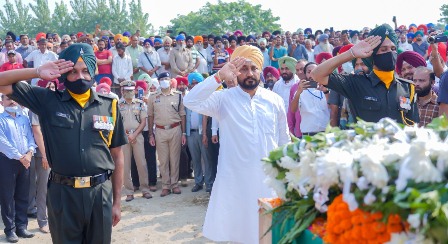 Shouldering the mortal remains of the martyr accompanied by the Speaker, Punjab Vidhan Sabha Rana K.P. Singh, the Chief Minister also laid wreath and participated in the Ardas.

He also accompanied the martyr’s nephew and his father to lit the pyre of the brave heart who made the supreme sacrifice in the line of duty in a gunfight with the terrorists in Poonch sector (Jammu & Kashmir) on October 11.

Sharing his heartfelt sympathies with the members of the bereaved family, the Chief Minister said that Gajjan Singh’s unprecedented sacrifice would ever inspire his fellow soldiers to perform their duties with utmost dedication and commitment to preserve country’s sovereignty and integrity.