CM Mann visits Moosewala’s house and expresses his condolences to the bereaved family. 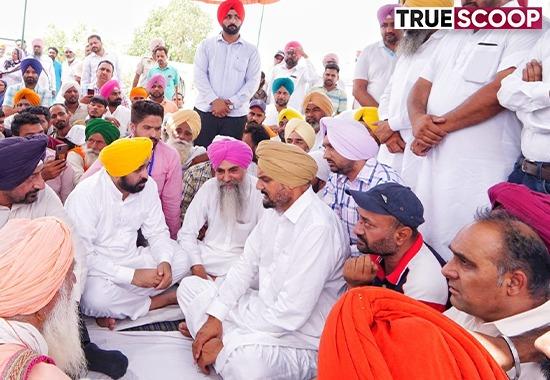 Punjab CM Bhagwant Mann visited Moosewala’s house today and consoled his family over their son’s death. Mann reached the village under tight security. But the villagers launched a protest on his arrival.
The villagers were upset as they were stopped from entering Moosa village by the police. On the other hand, the police stated that no one was stopped from entering the village.
It was expected that due to protest CM’s visit will be postponed but CM arrived at the scheduled time. It should be noted that on Thursday, Punjab Finance Minister Harpal Cheema was the first AAP minister to meet Moosewala's father and console him over his son’s death.
The AAP MLA Gurpreet Singh, who wanted to go to Moosewala's house ahead of Mann's visit, was also forced to return due to a massive protest. Senior officials of the administration and the police reached the spot of protest to calm down the villagers.