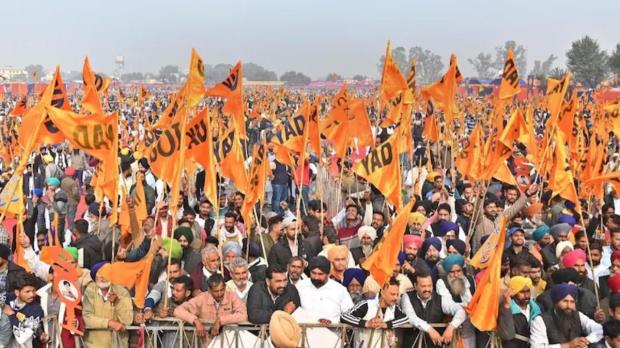 Punjab has seen mass congregations in political rallies, with its leaders and supporters not setting the best benchmark!
Amid the threat of Omicron variant, people in the face at political rallies: there is no "social distancing" and barely anyone wearing a "mask".
Earlier, Punjab Chief Minister Charanjit Singh Channi was seen in the driver's seat. As he flagged off a fleet of new buses. Where neither he nor his ministers were seen wearing a mask.
With an increase of the Omicron case across several states, poll-bound Punjab has announced new restrictions from January 15.
As per new guidelines issued by the Punjab government, no restrictions have been imposed on mass gatherings. Elections are around the corner, this restriction is not imposed to carry on huge rallies by political leaders irrespective of the increase in Covid cases. No guidelines have been issued related to gatherings in marriages and funerals. Earlier, these points were covered in advance whenever Covid guidelines were issued by the government.
According to the state government, people who are vaccinated with both doses will not be allowed in public places.
The Punjab government order also says "all those adult persons who have not yet taken both the doses of COVID vaccination should remain at their residences and should not visit public places, markets, functions, public transport and religious places."
This restriction is in effect, and would also be applicable to all political rallies. As the elections draw is near, it may be harder to implement. Although privately, in the state many also say that implementation of this restriction could be problematic.
Also Read: United States under the dark shadow of Coronavirus; Read to know details
Especially, when all the leaders are in a political race to gather more support from the crowd, to become superior to the rivals as a show of strength.
How can a restriction for Covid-19 be implied when the political leaders of Punjab themselves are not seen following any Covid-appropriate behavior?
Amid the spread of the deadly Novel Coronavirus, the political parties seem to stress more upon the political race than stressing upon proper 'Social Distancing'. Rallies and Mass gatherings can still be noticed taking place in Punjab.
Congress leader, New and Renewable Energy Minister Raj Kumar Verka says, “Punjab will adhere to the guidelines. We have laws to enforce the guidelines. But leaders and people have to be cautious and responsible as well. The Congress government in the state is stepping up efforts to vaccinate people.”
Raghav Chadha of the AAP says, "All political leaders should lead by example. All leaders should help enforce rules. This is not a matter of debate. The government and people should help ensure there is no third wave."
Speaking in Amritsar, SAD leader Sukhbir Badal says, "We must take this situation seriously and take precautions. Especially since the state has been through a difficult situation. The government should expand the drive for vaccination and booster doses.”