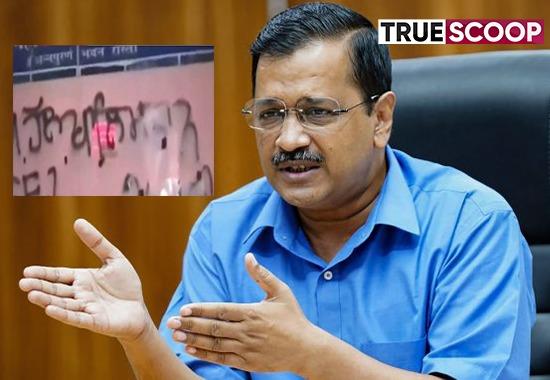 Punjab: The nefarious acts of Khalistanis are coming to the fore one after the other in Punjab. After the assembly elections in Punjab, Khalistanis are continuously committing cowardly acts. Now a similar case has emerged from Sangrur in Punjab. Here Khalistani slogans were written on the wall of a Kali Mata temple in the city.
Slogans of Khalistan Zindabad have been found at the gate of Kali Mata temple in Sangrur amid Lok Sabha by-elections. On knowing this, there was a stir in the police and administration. The slogans were quickly wiped out. The election code of conduct is in force in Sangrur and polling will be held on June 23.
Also Read: Who is Manmohan Mohana? Man who 'did recce' of Moosewala had a connection with Congress' Raja Warring
Such information is being received that today itself Arvind Kejriwal, the supremo of the Aam Aadmi Party, which is running the government in Punjab, is coming to Sangrur. They can also come to this temple to bow their heads. In such a situation, big questions are being raised about the law and order due to such an act.
There is no CCTV camera in front of the place where the slogans were written. Because of this, it has not been disclosed who wrote the slogans. The police are now engaged in checking the CCTVs installed on the roads leading to the temple.
Earlier slogans of Khalistan Zindabad have also been written in Faridkot and Ferozepur. In Faridkot, these slogans were written first on the wall of the Baazigar Basti park and then on the wall of the judge's Kothi. After this, these slogans were written outside the Divisional Railway Manager's ( DRM) Kothi in Ferozepur.