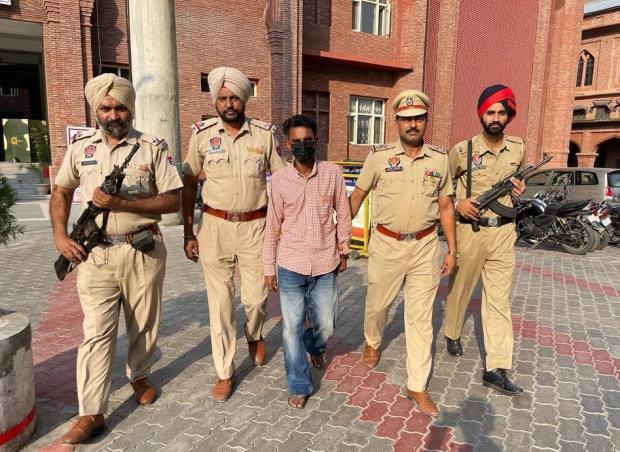 As part of the ongoing war against anti-social elements waged on the directions of Chief Minister Bhagwant Mann, Punjab Police has arrested an operative of Canada-based gangster Lakhbir Singh alias Landa gang from Bihar for his involvement in several heinous crimes pertaining to murder, attempt to murder, assault, robbery and snatching, said Director General of Police (DGP) Punjab Gaurav Yadav here on Wednesday.

The arrested gangster, identified as Karan Malik alias Karan Mann of Amritsar, is said to be a close aide of the main perpetrator in the IED planted under SI’s car case identified as Yuvraj Sabharwal alias Yash, who is an associate of Canada-based gangster Lakhbir Landa. Karan Malik is a history-sheeter and wanted by the Punjab Police.

DGP Gaurav Yadav said that following reliable inputs that gangster Karan Malik has been taking shelter somewhere in District Jamui of Bihar, the team of Anti-Gangster Task Force (AGTF) of Punjab Police in a joint operation with Central agencies and Bihar Police launched the search operation and managed to round up the accused at village Darima in District Jamui of Bihar.

Divulging details, he said that accused Karan Malik along with his associates had killed a person identified as Karan during a fight in July 2021. An FIR No. 184 dated 18.07.21 had been registered under sections 302, 148, and 149 of the Indian Penal Code (IPC) and sections 25/54/59 of the Arms Act at Police Station B-Division Amritsar City.

Further, accused Karan Malik along with his accomplices had looted 530gm gold, 6 kg silver, and Rs 1 lakh cash from Lal Chand Jewellers at Fairland Colony in Amritsar in August 2021. A case FIR No. 149/2021 had been registered at Police Station Majitha Road, Amritsar in this regard.

The DGP said that during the preliminary investigations, it has come to light that the accused Karan Malik used to purchase weapons of .32 bore from an arms smuggler identified as Sahil for an amount of Rs 40,000 per weapon. Pertinently, Sahil along with his accomplice Himmat of Amritsar had been arrested by Punjab Police a few days back, and four weapons were recovered from their possession.

Meanwhile, the Police are conducting raids to nab Karan Malik’s younger brother identified as Arjun Malik alias Arjun, who is also involved in various criminal activities. Further investigation is going on to unravel their network.