#Tokyo2020 for India tweeted on twitter, ‘In Safe hands’. 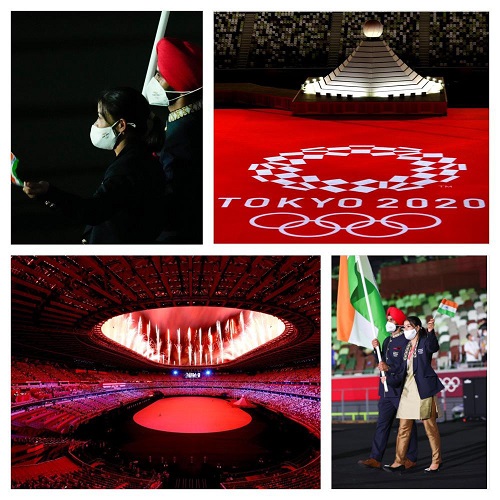 Tokyo Olympics opening ceremony begin today with a bang. It was year-long delay due to Covid-19 pandemic. This is the first time that the Olympics games have been postponed and rescheduled, rather than cancelled.

Despite being rescheduled for 2021, the event retains the Tokyo 2020 name for marketing and branding purposes.

The opening ceremony of Tokyo Olympics 2021 took place on July 23 at newly-built National Stadium in the Japanese capital while the closing ceremony will be held on August 8, 2021 at the same venue.

Leaders from around 15 countries have been invited to attend the opening ceremony of Tokyo Olympics. Reports in Japan have suggested that those attending the ceremony in person could be as low as 1,000 due to the pandemic.

Manpreet Singh and Mary Kom led India's contingent out during a colourful opening ceremony in Tokyo.

At the Tokyo Olympics opening ceremony, India was at 21st out of 205 contingents in the Parade of Nations.

A vastly smaller number of athletes, about 20 per nation, marched in the teams' parade, with many flying in just before their competitions and due to leave shortly after to avoid infections.

Chief Cabinet Secretary of Japanese government Katsunobu Kato said, “The decision to limit the number of attendees during the opening ceremony at the National Stadium was taken in view of the organisers' efforts to control the raging COVID-19 pandemic.”

He further stated, “Around 70 cabinet-level officials are also set to visit Japan, adding that there is still uncertainty over the number of VIPs attending the opening ceremony.”