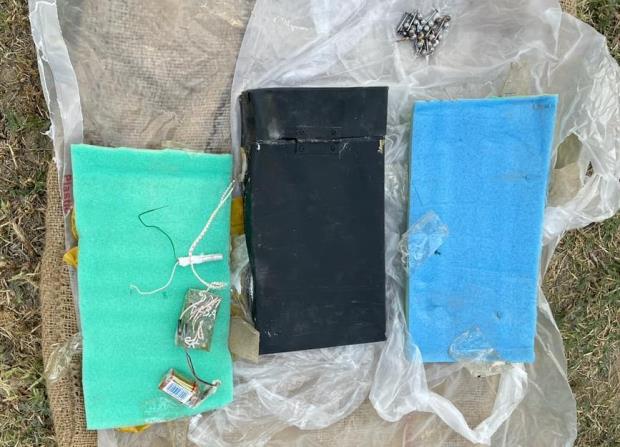 Averting a possible Terrorist Attack in the border state, Punjab Police on Sunday arrested persons after recovering an Improvised Explosive Device (IED) equipped with RDX packed in metallic black colour box (12 inches x 6 inches x 2.5 inches) having a gross weight of over 2.5 Kg from village Naushehra Pannuan in district Tarn Taran. The IED was equipped with Timer, Detonator, Battery and Shrapnels.
Those arrested have been identified as Baljinder Singh alias Bindu (22), a resident of village Gujjarpura in Ajnala, Amritsar; and Jagtar Singh alias Jagga (40) of village Khanowal of Ajnala, Amritsar. The police have also recovered a Bajaj Platina motorcycle and two mobile phones from their possession. Bindu was working as a Nursing Assistant in a private Hospital in Ajnala, while, Jagga is a labourer and both were carrying out this activity for money and drugs.
The development came three days after four persons were arrested with recovery of three IEDs packed in a metallic case (2.5 kg each) and one pistol, from Karnal by the Haryana Police following the inputs from the Punjab Police.
Divulging details, ADGP Internal Security RN Dhoke said that the Tarn Taran Police had a received a secret information that Bindu and Jagga carrying explosives are roaming in Naushehra Pannuan area and are planning to carry out a blast to spread terror among people in the area.
Acting promptly, SSP Tarn Taran Ranjit Singh sent police teams to conduct raids in the area and both the accused persons were arrested with an IED in metallic box when they were going on a motorcycle after retrieving it from the adandoned place, he said.
SSP Ranjit Singh said that initial investigation reveals that the accused persons had gone to retrieve the IED on the instructions of their accomplice identified as Jobanjit Singh alias Joban, a resident of Awan Vasau in Ajnala. Jobanjit is already facing criminal cases under the NDPS act and has been declared a Proclaimed Offender (PO), he said.
The SSP said that Bomb Disposal team of Punjab Police later diffused the IED, which had nearly 1.5kg of RDX.
Meanwhile, an FIR No 70 dated 08.05.2022 has been registered under section 25 of the Arms Act, sections 3, 4 and 5 of the Explosive Substance (Amendment) Act and section 120-B of the Indian Penal Code (IPC) at Police Station Sarhali in Tarn Taran and further investigation are on.