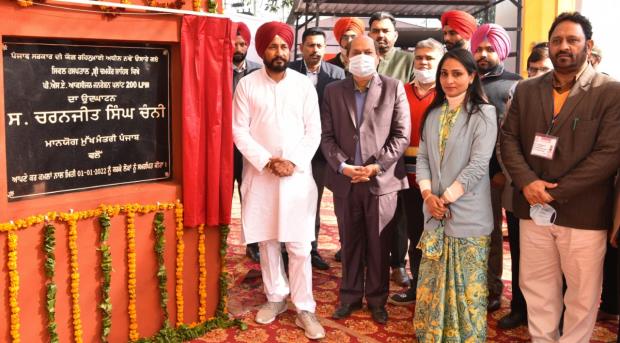 Punjab Chief Minister Charanjit Singh Channi on Saturday paid obeisance at Gurudwara Sri Qatalgarh Sahib on the occasion of New Year and prayed for Sarbat Da Bhala (welfare of all).
After paying obeisance CM Channi announced a new year bonanza to the people of Sri Chamkaur Sahib. The Chief Minister dedicated City Centre to the Public at Sri Chamkaur Sahib. This City Centre has come up at a cost of Rs. 5.60 crore in four acre land. Earlier this land was a filthy dirty water pond which has been transformed into city centre with provisions of Cafeteria, Gymnasium Hall for girls, 2 Multi- purpose Halls and 2 acre playground especially for girls. Besides this City centre would be used for social gatherings for the public.
CM Channi also inaugurated the 200 LPM PCA Oxygen Generation plant at Government hospital Sri Chamkaur Sahib. Speaking on the occasion the Chief Minister said that Punjab is fully ready to tackle 3rd wave of Corona or Omicron threat. CM Channi said that Kejriwal's Delhi Health model was a complete failure during 1st & 2nd wave of Corona, thousands of people ran from Delhi to Punjab during that phases for treatment. CM Channi said that now Kejriwal is making such fake promises of Delhi health and education models in Punjab, but the people of Punjab are very much aware of his such theatrics. He said that a person who cannot even handle a City like state properly how can he run a complete state.
CM Channi also gave a new year bonanza to the Youth of the state to promote sports culture and motivate youth towards sports. He gave ahead for laying 7 aritificial turfs 2 for hockey and 5 for footbal. These would be laid at Sri Chamkaur Sahib, village Mehtot, Dhangrali, Kakrali, Behrampur Zimidara, Balamgarh Mandwara villages and Kharar City in Mohali district. The Chief Minister said that this project would cost Rs. 5. 50 Cr.
Prominent amongst others present on the occasion included ACS Sanjay Kumar, Director Tourism & Culture Kamalpreet Kaur Brar, Deputy Commissioner Sonali Giri and SSP Vikas S Soni.