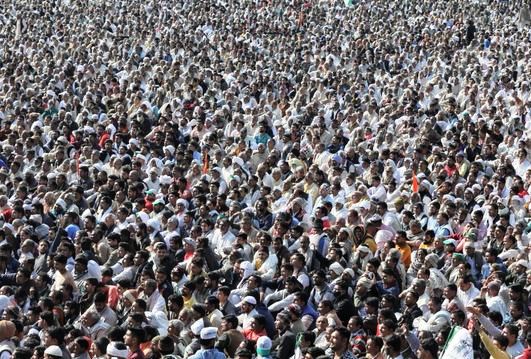 Drawing a massive gathering of farmers and people from all walks of life, Mahapanchyat at Jagraon in Ludhiana on Thursday sends a message of getting the farm laws repealed across Punjab. It has also send shockwaves across India since the farmers are agitating against the three farm laws:

After these laws were enacted in September 2020, the farmers are up in arms and now they are protesting around the borders in Delhi. Many farmers have died during the protest that is going strong even after more than 70 days. The farmers, comprising of young and old, women and children, across all religions, blurring the boundaries of caste and class have come up at the borders in Delhi because they only have to choose between a devil and a deep blue sea.

The governments that came to power in the past had also promised to double the incomes of farmers but it remained a distant dream. Situation remains grim for the farmers because from climate change to untimely rains and change in price have let down farmers time and again.

Manish Tiwari, Congress leader, MP and a lawyer has written in an article published in a leading news daily, "Delhi has never understood Punjab and does not do so even now." Tiwari further mentions that farmers get around 20-24 quintals of wheat from one acre of land in a good year where one quintal equals to 100 Kilogram. He says that if the year is bad, the yield can go down the slippery slope to 7-10 quintals. As the MSP is Rs 1,925 per quintal, the farmers is likely to get Rs 38,500 per acre.

It was extremely important to discuss the background of why farmers are protesting. They are languishing in a web of low yield, low income and thus, downward mobility. The new laws change the basic structure for farmers. The entry of big corporate who are already monopolizing everything is a direct threat perceived by farmers and the government is behaving adamant. The union government's official stand is really problematic that says only the farmers of 'one state' have problem with the laws.

The union government is misreading the entire atmosphere even if the protests are spearheaded by farmers of Punjab. The mahapanchayats are a biggest proof that not only the farmers of Punjab but also the farmers of Uttar Pradesh, Rajasthan, Haryana, Maharashtra among others have serious issues with the present laws.

Will farmers' protest lead to emergence of new leadership in Punjab?

Coming back to the Jagraon Mahapanchayat, what is its relevance at a time when the government is holding its believes tightly guarded that the protesters belong to Punjab at a time when Rakesh Tikait came at the vanguard in the protest. Will the Mahapanchayats translate into not only morale booster but also fulfillment of demands of farmers? Is it going to change political landscape in Punjab?

At a Mahapanchayat in Jagraon, Ludhiana, Kiranjeet Singh Sekhon from Kul Hind Kisan Federation said, "Our bodies may come, but we will not come without winning." Balbir Singh Rajewal, President of BKU Rajewal said, "We will win. However, I want to assert to all of you that if we remain peaceful, we will win and if any violence happens, Modi will win. After January 26 episode, aandolan suffered a setback, but it took just two days to people to understand the chronology and again started moving towards Delhi borders, let thsi movement continue. Let us be the strength at all the border be it Singhu, Tikri, Palwal, Shahjahanpur and even Ghazipur. I bow before all of you for being the main force behind this movement."

Such a Mahapanchayat in Punjab's Jagraon in Ludhiana is on the same lines of  Mahapanchayats in Haryana, Uttar Pradesh and Rajasthan in the past couple of days.

The relevance of such Mahapanchayats have risen manifold because farmers and people attending the Mahapanchayats have given a clear signal that they are ready for a long haul. At a time when the leaders of BJP-JJP ruled Haryana are unable to hold public meetings in the state, the farmers are sending a clear signals that the storm is brewing against the ruling BJP at the center also.

These Mahapanchayats have transformed the farmers' protest into a people's movement. Although, sympathizers of farmers movement have previously also supported it. Everyone from Punjab, Haryana and other areas is personalizing the protests as their fight for the collective benefit of all. Moreover, at a time when the Modi government is being perceived as hand in glove with business tycoons, the farmers' protest can be a message to the party about its stand on several subjects.

As far as Punjab is concerned, it is very likely that another front will rise in Punjab. One can expect Rajewal or any other leader from the farmers' protest to lead that front politically. However, it is still obscure who will be the first to announce such a massive front to take down on Congress, SAD, AAP and BJP in the state. The politically landscape will be governed by the farmers' protest. Repeal of the laws or adamant attitude of the central government, political change has become imminent in Punjab. The Chief Minister of Punjab, on various occasions has come out in support of farmers. Legal, material and other kinds of help is being promised by the state authorities. Congress has an upper hand but a new leader can reap the benefits of protest.

Besides changing landscape, farmers issues have again come on the center stage for all the political parties. Their issues will be highlighted in the election-manifestos. On the repeal of laws, farmers are determined. They want repeal of laws and nothing else. The situation will be further determined after the farmers demands will be accepted.