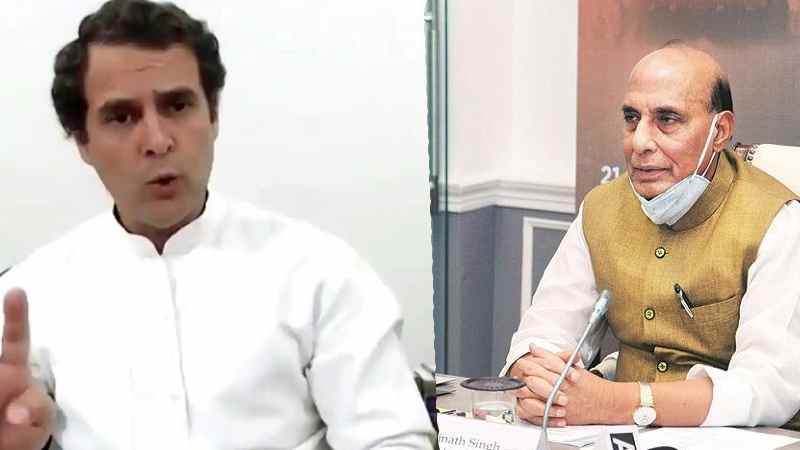 Former Congress Chief Rahul Gandhi on Wednesday once again questioned the Narendra Modi-led BJP government at the Centre over the military standoff with China and asked if the government could confirm that no Chinese soldiers entered India.
In a tweet, Rahul Gandhi said, "Can Government of India please confirm that no Chinese soldiers have entered India?" He also attached a news report that said that India-China will hold top-level military meeting on June 6 in a bid to resolve the troop confrontation in eastern Ladakh, quoting Defence Minister Rajnath Singh, where he also admitted that Chinese soldiers were present in a sizeable number in the high altitude.
Earlier, Rahul Gandhi slammed the Central government on May 29 and also during his press conference in the last week of May. In a tweet on May 29, Rahul Gandhi said, "The government's silence about the border situation with China is fuelling massive speculation and uncertainty at a time of crisis. Government of India must come clean and tell India exactly what's happening."
On May 26, during his fourth address to media through video conferencing, the former Congress chief had said, "The details of what happened along the border, the government should share with the people."
He said what happened with Nepal and why, what is happening in Ladakh should be made clear. "I cannot see transparency. The issue of Ladakh and China is a live issue. Transparency is required," he said.
He was responding to a question on the face-off on the LAC that was triggered after the Chinese objected to road construction and development of infrastructure by India within the Indian territory.
Rajnath Singh Accepts Facts:
Also Read: PM Modi accepts Trump's offer to be part of 'expanded' G7 to discuss China
After two weeks of downplaying the intrusions by thousands of Chinese People’s Liberation Army (PLA) soldiers into Ladakh, Defence Minister Rajnath Singh has admitted that “large numbers” of Chinese troops had crossed into India’s side of the Line of Actual Control (LAC) — the de facto border that both countries have mutually agreed to respect.
“It is true that Chinese soldiers (are) on the LAC. There are differences in both sides’ perceptions of where the frontier runs. And the Chinese soldiers have arrived there in large numbers,” stated Rajnath in a television interview on Tuesday.
“India is doing what it needs to do in the circumstances,” said the defence minister, while declining to spell out the measures.