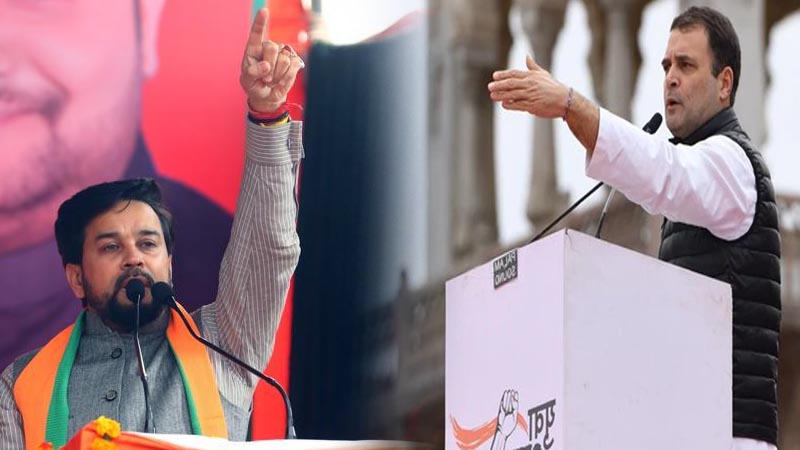 A student of Jamia Milia Islamia was injured when a man opened fire at a group of protesters and yelled "Yeh lo azaadi," which created panic in the area of the protest.

Reacting to this, Congress on Twitter said: "What kind of police force is Amit Shah running? Delhi police is standing idly by as a man shoots at peaceful protestors. Is this what BJP leaders like MoS Finance, Anurag Thakur intended? Creating an armed militia of radicalised youth. #BJPkaGodseRaj."

The firing incident at Jamia area in Delhi comes after Election Commission banned Union Minister Anurag Thakur from campaigning in the Delhi Assembly polls for three days for his hate speech against against anti-CAA protesters of Shaheen Bagh.

Along-with Anurag Thakur, EC had also ordered the removal of BJP MP Parvesh Verma from the party's list of star campaigners for Delhi polls over his controversial remarks.

Meanwhile, the man who opened fire during the anti-CAA protest in Jamia area of New Delhi has been detained. He has been identified as Gopal, a resident of Jewar in Greater Noida. Gopal reportedly went live on Facebook moments before he fired a pistol at the group of anti-CAA protesters.

Apart from four live videos from the Jamia firing spot, Gopal had shared a few cryptic posts on his Facebook timeline. One of them was 'Shaheen Bagh, khel khatam (game over)'.

Get the latest update about AAP, check out more about Anti CAA, True Scoop News, Face Off & BJP