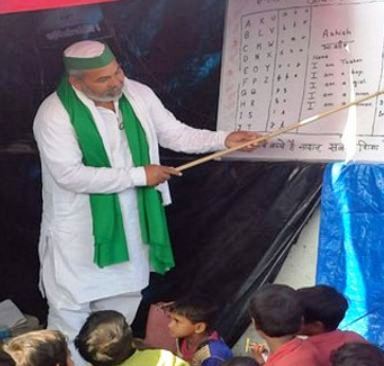 Rakesh Tikait, one of the leaders of Bharatiya Kisan Union who saved the protest by farmers after January 26 unrest has turned a teacher for students at Ghazipur. According to a report, he started teaching students in a makeshift school at the protest site.

The farmers have been protesting at the borders around Delhi for nearly three months now. According to ANI, Tikait not only taught the students algebra and alphabets but also asked them what they have learnt.

Dharmendra Malik, a spokesperson of BKU said he also took stock of what the students have learnt. Tikait was quoted by ANI as saying, "I came here to look after what they are learning even I taught them too. They came here to study from nearby slum areas. I also asked children to plant trees on their birthdays: it will clean up the environment."

Tikait even took a dig at the facilities for imparting education for poor children. In a Press release Tikait said, "The children of rich study in air-conditioned schools and those of poor don't even have 'taat-pati' schools."

This initiative is first of kind and earlier also the library is functional at the protest site.

Get the latest update about FarmLaws, check out more about Rakesh Tikait, FarmerProtests News, Ghazipur & BlackLaws