UP Madrasa: A big decision of the Yogi Adityanath government of the state is going to be implemented in the madrasas of Uttar Pradesh from today. 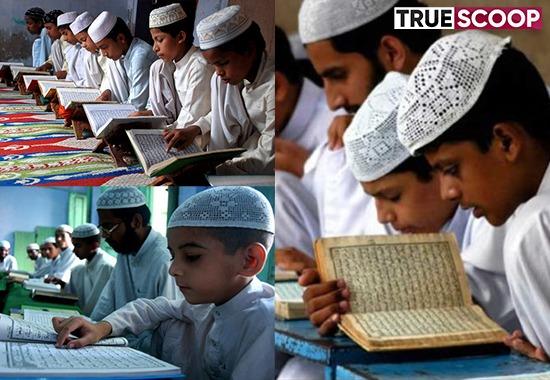 UP Madrasa: A big decision of the Yogi Adityanath government of the state is going to be implemented in the madrasas of Uttar Pradesh from today. Because now there will be a national anthem before the start of studies in madrasas.
The national anthem will be sung in all recognized aided and non-aided madrasas of the state. Madrasas are opening from today due to the Eid holidays and from today onwards the national anthem will be sung in madrasas. For this, in the meeting held on March 24, all-district minority welfare officers were asked to implement it immediately. But it could not be implemented due to the start of the Ramadan holiday.
According to media reports, instructions have already been sent by the Madrasa Education Council of the state. Under which the national anthem was ordered to be sung from the new session in recognized, aided and unaided madrasas.
At present, the meeting of the Madrasa Board was held in March and in this meeting, President Iftikhar Ahmed Javed took many decisions. In which a decision was also taken to sing the national anthem in madrassas. Along with this, in the meeting, it was decided to conduct the examinations of Munshi, Maulvi, Alim, Kamil and Fazil from May 14 to 27.
Also Read: CM Mann directs SSPs/CPs to coordinate with STF to nab big sharks of drug mafia
Examinations will be held in madrasas only
The work of evaluating copies of the UP Board exam and summer vacation is going on in the schools of the Uttar Pradesh Board of Secondary Education. Due to which the colleges are not vacant. Therefore, the Madrasa Board had decided to conduct the examinations in the madrasas themselves.
There will be six paper exam
Apart from this, there will now be six paper examinations in the Madrasa Board. In this, apart from Diniyat in the syllabus of classes 1 to 8, there will be question papers in Hindi, English, Mathematics, Science and Social Science.
In the meeting of the Madrasa Board held recently, it was also decided that a biometric system would be installed in every madrassa for the attendance of teachers and the facility of online registration of students would also be started from the new session.
Teachers will be appointed in madrasas on the lines of TET
The UP Madrasa Board, through a meeting, has decided to appoint teachers in madrasas on the lines of TET and for this first examination will have to be taken and those who pass it will be given an appointment in madrasas.
Along with this, the Madrasa Board had decided that if the number of students in the madrassas is less, the teachers will be adjusted in other madrasas.