Bollywood actress Richa Chadda was barely able to hide her happiness when she tweeted, "Welcome to the international impact of hate." But she was not alone, more 'educated' people like her were present on social media. Author : Rohit Gupta 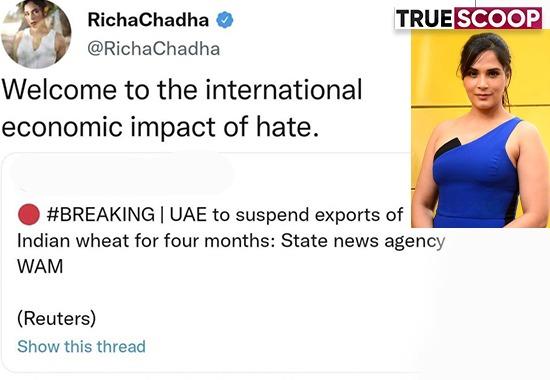 Richa Chaddha Latest Tweet: Recently, as soon as it came to know that the UAE has taken an important action in the context of India, the Liberals' happiness knew no bounds but the reality was different and when the reality came out, the condition of the Left was in disarray. In this article, we will know how the Left made a ridiculous attempt to demean India in the antithesis of PM Modi and how the same effort backfired on them.
These days, the case of Nupur Sharma is very much discussed not only in India but also in Central Asia. Be that as it may, after all, the leftists and fundamentalist Muslims, through their masters, tried hard to humiliate India. In such an 'important' decision, the United Arab Emirates (UAE) has decided that it is cancelling the export of wheat from India for some time!
Now, what is the equation behind this decision and what will be the consequences of this decision? Without giving any thought to this, many leftists became happy as if they were getting some personal benefit from this ban.
Bollywood actress Richa Chadda was barely able to hide her happiness when she tweeted, "Welcome to the international impact of hate." But she was not alone, more 'educated' people like her were present on social media. A user posted, "When will we send the bulldozers over there?"
What did the analyst associate with UAE say?
But soon the root cause is also revealed, which NDTV deliberately hid in the Hindi version, and due to which Richa Chadda later deleted her ridiculous tweet. Hassan Sajwani, an analyst with the UAE, tweeted.
Also Read: UAE suspends export & re-export of Indian wheat for 4-months, Is Nupur Sharma's remarks behind it?
“UAE's Ministry of Economic Affairs has decided to restrict the export of Indian wheat for the next 4 months. This means that Indian wheat coming to UAE will not go anywhere else from UAE, it will remain in UAE. This decision has been taken due to business problems and the close ties between India and UAE.
Come on, it means that you ate and drank nothing, the glass boils at twelve annas. However, this is not the first enchantment of the Liberals, brother. When Nupur Sharma's remarks claimed to have garnered 'international support' from Islamic countries, the Left claimed that countries like Qatar, Oman, Kuwait, and Iran sought accountability from India's ambassadors and that India's products are now publicly available.
But there will be a boycott. Now it is another matter that Oman slipped down the narrow lane, Qatar-backed OIC was shunned by India, and Iran's foreign minister himself came on a visit to India and spoke on the subject.
In such a situation, when the UAE allegedly took action against India, without any thought, the Liberals started humiliating India, but little did they know that this bet would be heavy on them.