Yash's daughter's video has been doing rounds on social ever since the KGF star has shared on video on his Twitter handle. 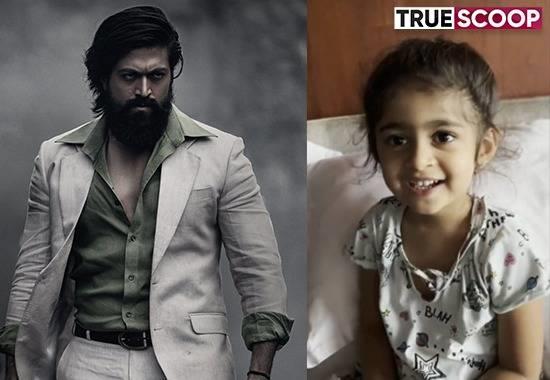 KGF star Yash has been winning the hearts of everyone with his powerful gangster yet hero role around the world. Yash's character of 'Rocky Bhai' has taken the world by storm, especially in India fans are adoring the KGF 2 actor. However, the deadly 'Rocky Bhai' is a gentleman in his real life and loves to spend time with his family. Yash on Saturday took to his Twitter handle and shared an adorable video of her little daughter singing song 'Salaam Rocky Bhai' in order to tease her father.
Yash's daughter's video has been doing rounds on social ever since the KGF star has shared on video on his Twitter handle. In the Yash daughter viral video, fans can see Ayra singing 'Salaam Rocky Bhai'. However, the Yash daughter viral video turns out to be more cute and adorable as Ayra sings 'Rocky  Boy' in place of Rocky Bhai. She is seen laughing and calling her Rocky Boy in the video. Sharing the video, Yash captioned, "Morning ritual.. has to begin with making fun of Rocky "BOY"
Yash daughter 'Rocky Boy' Viral Video
Also Read: 'KGF: Chapter 2' continues dream run at BO, breaches Rs 1,000 crore mark

KGF Chapter 2 breaches 1000 cr mark on worldwide box-office
Two weeks after its release, Yash-starrer 'KGF: Chapter 2' is showing no signs of flagging at the box office. The pan-India blockbuster from down south has crossed Rs 1,000 crore in worldwide collections and looks on course for greater glories.
The movie, directed by Prashant Neel, is the first movie from Karnataka to break into the Rs 1,000 crore club. It is only the fourth movie after 'Dangal', 'Bahubali 2' and 'RRR' to achieve this distinction. The Hindi version of 'KGF 2' continued to rake in collections. On the 16th day, gross collections of Rs 5.01 crore, and overall collections for Hindi was Rs 416.60 crore.