The meeting started at 2.30 pm at Vigyan Bhawan. 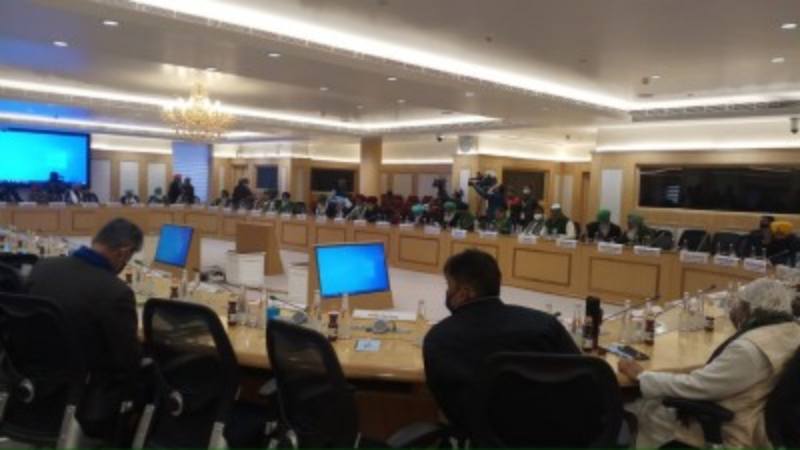 A crucial and 'decisive' sixth round of dialogue between the Centre and the 41 farmers' representatives began on Wednesday here to end the deadlock as the agitation entered 35th day. The meeting started around 2.30 p.m. at Vigyan Bhavan in the presence of Union Agriculture Minister Narendra Singh Tomar, Consumer Affairs Minister Piyush Goyal and Union Minister of State for Commerce and Industry Som Parkash. Agriculture Secretary Sanjay Agarwal and other Ministry officials also are attending the meeting.

After five inconclusive talks, the government now hopes that this meeting would be "decisive" to end the agitation against three contentious new agricultural legislation enacted in September during the Monsoon Session of Parliament. The withdrawal of these laws is the first and the major demand of the agitating farmers.

In the meeting, the government will try to placate the farmers' anger on the market-oriented reforms introduced by it, said government sources.

Earlier, the Union Agriculture Ministry in an official letter had confirmed the resumption of talks mentioning a four-point agenda of the meeting that includes "modalities to be adopted for the repeal of the three Central farm acts; mechanisms to be adopted to make remunerative MSP (Minimum Support Price) recommended by the National Farmers' Commission into a legally guaranteed entitlement for all farmers and all agricultural commodities; amendments to be made and notified in the 'Commission for the Air Quality Management in National Capital Region and Adjoining Areas Ordinance, 2020' to exclude farmers from the penal provisions of the Ordinance; and changes to be made in the draft Electricity (Amendment) Bill 2020 to protect the interests of farmers".

After a meeting at Singhu border -- a major protest venue at the Delhi-Chandigarh border -- the farmer leaders under the banner of All India Kisan Sangharsh Coordination Committee (AIKSCC) arrived at Vigyan Bhavan for the fresh talks reiterating that the "first and foremost demand of the farmers of India is to repeal the three farm laws and the Electricity Bill, 2020, every other demand only follows this".

Earlier, five rounds of talks between the two sides have remained inconclusive.