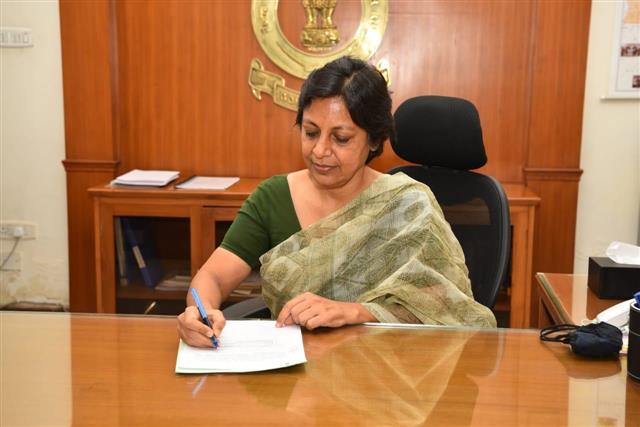 Chandigarh, March 15: In a major push for the rural development in the state, the Punjab Government has earmarked Rs 4,300-crore for the holistic development of the villages.

"The idea is to develop each and every village and ensure that every villager gets basic amenities at par with the cities to end the rural-urban divide in the state," said the Chief Secretary, Ms Vini Mahajan, while reviewing the ongoing development projects under the Rural Development and Panchayats department, here today.

Chairing a high-level meeting, the Chief Secretary complemented the village panchayats for ensuring qualitative work progress at the grassroots level despite the COVID scare.

She asked the department officials to speed up the ongoing development works and complete them within the stipulated time frame while ensuring quality control.

Under the rural development corpus, the Punjab Government had already released Rs 3,600 crore, of which Rs 2,400 crore had been spent, while another instalment of Rs 700 crore will be released by April.

"The panchayats deserve special applause for managing the development works and ensuring utilisation of Rs 2,400-crore fund despite the fact that the last one year remained under the shadow of COVID," the CS commented.

Reiterating the commitment of the Captain Amarinder Singh-led Punjab Government for the inclusive rural development in the state, Ms Mahajan said there was no dearth of funds and if needed, more funds will also be made available for uplifting the basic infrastructure in the villages.

Taking stock of the implementation of the MGNREGA in the state, she directed the department to ensure optimal utilisation of the funds so that the developmental work cycle was not affected and liquidity was infused to the rural folks.

She also asserted that adequate grants should be provided to the village gram panchayats to continue the development works in a seamless manner.

Additional Chief Secretary, Rural Development and Panchayats, Ms Seema Jain, apprised the Chief Secretary that all the ongoing development works were being monitored by the officials at the headquarters. She assured that the development funds will reach the grassroots level to improve the quality of life in the rural areas.