Bollywood superstar Akshay Kumar has a rakhi sister and it is 'Anupamaa' star Rupali Ganguly. 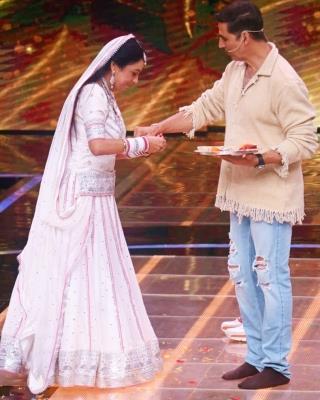 Bollywood superstar Akshay Kumar has a rakhi sister and it is 'Anupamaa' star Rupali Ganguly.

Rupali will be seen tying a rakhi to Akshay and talking about her first meeting with him.

Akshay is coming on the sets of the reality show 'Ravivaar with Star Parivaar' to promote his film 'Raksha Bandhan'.

While both Akshay and Rupali celebrate rakhi, the 'Anupamaa' fame calls him her 'rakhi brother'.

Rupali says: "Akshay and I go way back. He is my rakhi-brother. We lost touch for a while when he became such a big personality. It gets a bit awkward after a while."

Talking about her first meeting with Akshay, she says: "It was back in 1992 when I started tying 'Rakhi' to him, and in 2022, I got to see him again and tie another 'rakhi', all thanks to the show."

During the show, families that are part of daily fictional dramas compete with each other through various activities including dancing and singing and the winning team is announced as 'The Best Parivaar'.

'Ravivaar with Star Parivaar' airs on Star Plus.