The Chimpanzee Ukraine viral video has been doing rounds on social media with netizens all amused with the incident. 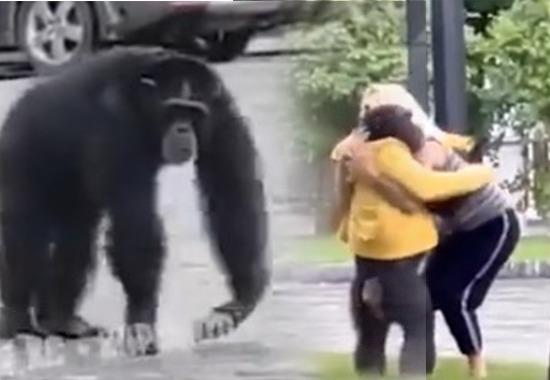 While Ukraine continues to be at war with Russia, a hilarious video went viral on Wednesday after a Chimpanzee escaped from Kharkiv zoo. The incident took place on Monday when a chimpanzee was filmed walking down the streets of Kharkiv and zoo employees followed her in order to bring her back. The Chimpanzee Ukraine viral video has been doing rounds on social media with netizens all amused with the incident. In fact, the Chimpanzee Kharkiv zoo video is spreading like a wildfire and netizens are having a ball with how the incidents folded.

A monkey escaped from the Kharkiv Zoo today 🐵
The zoo employee had to catch and persuade the animal to return home for a long time.
As a result, the monkey froze and agreed only for a warm jacket. She was returned to the zoo on a bicycle.
The news we deserve pic.twitter.com/fmpLcBMwRE

After the Kharkiv Chimpanzee video went viral, the zoo’s director, Oleksiy Hryhoriev, confirmed to Ukraine’s public broadcaster Suspilne that the animal was safely back in the zoo. Notably, earlier in the war, Chichi (name of chimpanzee) had been evacuated from the Feldman Ecopark, an outdoor zoo on the frontlines in the Kharkiv region. Chichi was lucky to make it out alive as more than 100 animals were reportedly killed there, according to the owner - businessman Oleksandr Feldman.

Russia and Ukraine are at war for more than 200 days. Russian President Vladimir Putin declared full-fledged war on Ukraine under the name of a 'special military operation' that ultimately drew flak and sanctions from around the world.