Sabarimala Case: Matter to be re-considered on Thursday in the SC

The nine-judge bench of Supreme Court will hear the Sabrimala matter again on Thursday. 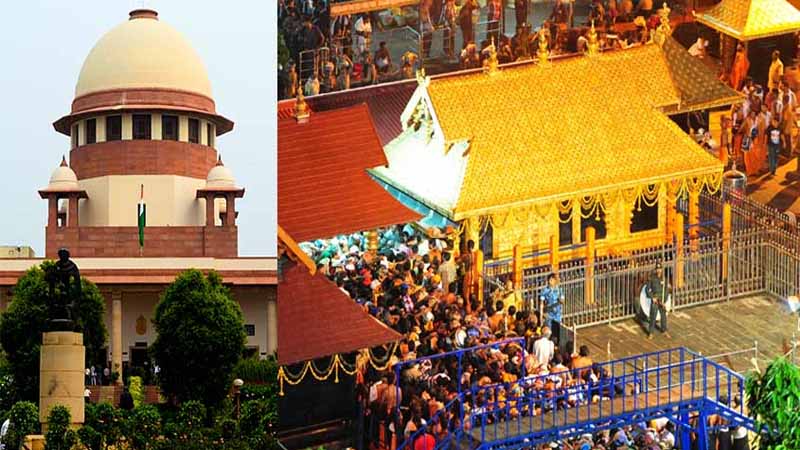 Solicitor General (SG) Tushar Mehta, during the day's hearing told the Supreme Court that the issues can be framed in the chambers itself. However, there is no need to frame questions and other issues if relevant, in an open chamber.

CJI SA Bobde, after hearing Mehta's submissions, acknowledged that there are questions which evolves in the Sabarimala, and also in other areas of concerned cases such as Muslim women's demand to enter mosques, and the FGM in Dawoodi Bohras and whether Parsi women married to non-Parsis lose religion.

Earlier, CJI Bobde had said that the court will look into the matter and hear the scope of judicial review on the point of religious faith and women's rights.

A period of 10-days has been fixed by Bobde to give conclusion on petition seeking women's entry into Sabarimala temple, mosques and Parsi Agiyari.

However, on January 13, the apex court said that it will only hear the questions referred to in the review order passed by it in November last year in the Sabarimala ttemple case, which allowed women and girls of all age groups to visit the shrine in Kerala.

The Supreme Court, in November last year, had observed that the entry of women into places of worship is not just restricted to the Sabarimala temple but also incorporates issues like Muslim and Parsi women to enter religious practice.

The court is bound to hear a set of petitions seeking reconsideration of its September 2018 judgment which has lifted the bar on menstruating women from worshipping in the Sabrimala temple.

The apex court in a landmark 4:1 ruling had set aside decades-old-restrictions on the entry of women of menstruating age inside the temple.

The verdict has ignited a series a protests in Kerala which eventually led to the filling of various petitions seeking review of the top court's order challenging tthe authority of the court to intervene in a belief of the people.

Get the latest update about ReConsideration of Matter, check out more about True Scoop, Parsis Entry to Mosques, Breaking Old Traditions & Sabarimala Case