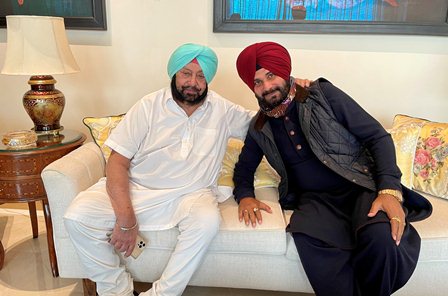 Punjab Chief Minister Capt Amarinder Singh on Tuesday finally broke his silence on the allegations made by former cabinet minister Navjot Sidhu on his own government over shoddy investigation in the SIT probe in Kotkapura police firing case.

In an interview to a private channel, Capt Amarinder Singh said that if Navjot Sidhu has any doubts on his capabilities to lead the government, then he should once contest election against him from Patiala to know the ground reality.

He openly challenged cricketer-turned-politician Navjot Singh Sidhu to contest against him and lose his security deposit like Gen JJ Singh.

Capt Amarinder Singh said that the former minister Navjot Sindh Sidhu may join the political party of his choice, but speaking against his own party is gross indiscipline.

“By raising questions and attacking the Chief Minister of his own government, it is clear that Sidhu wants to join some other party, but neither BJP nor Akalis will take Sidhu as he has continuously spoken against them, so there is limited choice left. He can either stay in the Congress or join AAP”, said Punjab CM.

Meanwhile, Sidhu suddenly became active in Punjab politics over the desecration of the Guru Granth Sahib, an incident which occurred way back in 2015. He has posted many tweets and even went to the Burj Jawahar Singh gurdwara, the epicentre of the sacrilege incidents in Faridkot district in 2015, in the recent past and said that the report prepared in connection with the case by the Special Investigation Team should be made public.

In his tweets, Sidhu has hinted that things are not smooth, saying: "When you keep your conscious mortgage, then no power matters."

The activeness of the cricketer-turned-politician is being closely watched by the Congress, while the Aam Aadmi Party (AAP) is also trying to fish in troubled water given that Punjab will go to the polls next year. Also, speculations are being made that Sidhu is all set to switch party and is likely to join AAP.

Replying why Sunil Jakhar and Punjab Cabinet minister Sukhjinder Singh Randhawa resigned, Capt Amarinder said that they both are doing good work and he has assured them that the culprits would be brought to justice soon. 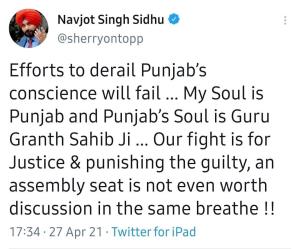 Meanwhile, minutes after reports of Capt Amarinder speaking up against the former minister went public, Navjot Singh Sidhu, in a tweet, said, “Efforts to derail Punjab’s conscience will fail ... My Soul is Punjab and Punjab’s Soul is Guru Granth Sahib Ji ... Our fight is for Justice & punishing the guilty, an assembly seat is not even worth discussion in the same breathe”.

Get the latest update about Punjab News, check out more about News, Sidhu hits back at Punjab CM, Punjab Politics & Navjot Sidhu