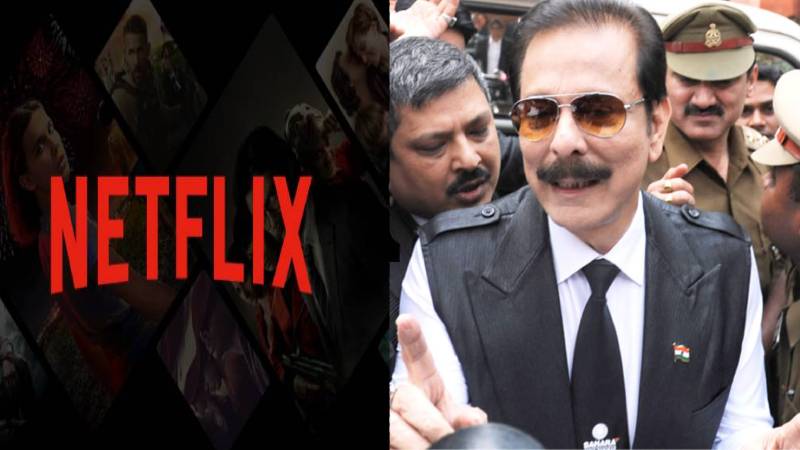 Sahara India Pariwar, one of the biggest conglomerates of India, strongly reacted to the episode on Sahara in the Netflix series - Bad Boy Billionaires and said it is ill-researched and completely baseless which is way beyond the facts.

Just to gain commercial benefits, Netflix has created an ill-conceived, spiced up commercial film full of sensationalism at the cost of the image of the Sahara Group which is unacceptable and highly objectionable, the statement said.

Sahara India demanded that the film be immediately banned throughout the world and Netflix should be asked to take the factual correct information, which should be incorporated and changed in the film and then to be exhibited. Sahara India Pariwar is a law abiding and a high-quality organisation, where nobody should have the right to malign its image, it added.

Objecting to the intention of Netflix, the spokesperson of Sahara India Pariwar said that "The whole film is bundle of lies, manipulating and ill-conceived which is an attempt made by Netflix to tarnish the image of Sahara. They have already publicised this film with the title 'Bad Boy Billionaires' and showing with Dr. Vijay Mallya, Mr. Nirav Modi who have taken away banks money whereas Sri Subrata Roy Sahara and Sahara Group have deposited Rs.22,000 Crore including interest with SEBI whereas SEBI did not require more than around 100 Crores repayments. Sahara has already repaid."

He further added that: "We are pointing out some of the major points categorically to substantiate that how ill-researched and irresponsible Netflix is in the film and legally as well as technically misguides the audience at large and take them away from the truth."

Sahara has strongly objected to Netflix using the chit fund tag for Sahara. He said that "the film wrongly mentions that Sahara is in the business of Chit Fund. This is completely wrong. We were never, and we are never a chit fund company. Since beginning we were under regulation of Registrar of Firms Societies, under regulation of Reserve Bank for 21 years, worked long years under Ministry of Corporate affairs and now our workers have promoted and running Co-operative societies under the regulation of Ministry of Agriculture."

Also Read: Netflix growth slows down in India during pandemic, company says 'still have much work to do in India market'

On the issue of re-investment, Sahara said "Netflix, in the film tried to paint a negative image of Sahara on the reinvestment aspect. Throughout the world, in all financial institutions including banks and, in the companies, where agents are promoting business like in Life insurance, etc. the reinvestment is always done in a big way. In our case around 40% is reinvested."

"Not a single rupee is forfeited in any of the schemes of Sahara whether the account continues or discontinued. It is said in the film that agents stop going to village and when the account is discontinued, account holder gets a letter of amount being forfeited which is absurd and wrongfully malign Sahara Group's image", the statement said.

Every financial institution in the world including banks works on rolling factor that is new business cash makes the repayment of old account because all surplus moneys are invested somewhere or other, to loans in case of banks, or in businesses like in Land, Real Estate, etc., which Sahara invests. So this film has created a very negative image of Sahara for not doing anything wrong in the business.

The spokesperson said, "It is an absolutely wrong allegation that we were fooling the investors in beginning years and then we were /are unable to repay. We are regularly repaying though in some cases delayed payments are done but we are paying interest of the delayed period up to the last day. Delayed payments are happening owing to the embargo imposed for last 8 years by the Hon'ble Supreme Court, any money generated through selling or mortgaging our assets of the entire group (including Co-operatives) or from joint ventures will be deposited in the Sahara-SEBI account, as per the directives of Hon'ble Supreme Court. Out of this, we cannot use even a single rupee for organisational work not even for repayment to the esteemed investors".

On cash payment, he said, "This issue has been very wrongly portrayed which has affected Sahara Group's image very badly. Most of the Sahara depositors are small depositors. They never go to bank because bank does not come to them. Small depositors mean they deposit small amounts. He added, "Historically we have seen that around Rs.9,000 is the average deposit size. These small depositors always want to take back their repayments in cash and these amounts of cash payments were/are as per law of the land. So nothing is wrong in it."

On Benami deposits, he said, "It is very wrongfully alleged that our depositors are not genuine. But we challenge that not a single case in our company will be found to be a benami deposit. They have blamed in the film that we have promoted Black money business. For us there is not a single case of Black money because we are issuing receipt of each and every deposit. That is the way banks also do."

He added, "In the film it has been said that we did 'Nautanki' by collecting 1,12,000 Sahara workers to sing National Anthem and made the world record in Guinness Book Of World Records. This inspiration came after we learnt that Pakistan has the world record in this aspect, singing national anthem with around 50,000 people in a stadium. So such an emotional think has been portrayed so much in nasty way which has maligned our image very negatively."

Sahara said there is a blatant lie has been said in the film that when Saharasri's mother was sick, he was attending marriage ceremony. "This shows their intention only to malign Saharasri Subrata Roy and the organisation's image with blatant lies", the spokesperson said.

Sahara denied that $ 60 million was spent on the marriages of Saharasri's sons. "Books can be checked; the total investment and expenditure was to the tune of $ 4 million out of which 60-70 percent is investment in making our auditorium, guest houses etc", he added.