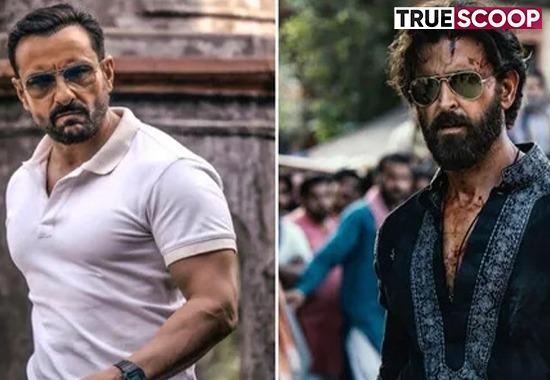 Pushkar and Gayathri’s upcoming film Vikram Vedha’s shooting is completed. Starring Hrithik Roshan and Saif Ali Khan in lead roles, the film is a Hindi remake of the Tamil neo-noir action thriller original (same title) that was released in 2017. The original featured Madhavan and Vijay Sethupathi as leading actors.
Hrithik Roshan shared the news on his Instagram handle, and also shared a wrap-up photo with the directors and Saif. He wrote a long caption, thanking the directors, and his co-stars, including Saif.
He also said that since the film was shot during the Covid-19 pandemic, there were a lot of challenges and uncertainties. He called his journey “frightful and delightful” as a skydive.
“Time and my audience will tell if my instincts were in the right place or not. But regardless of victory or failure, I am so so full of gratitude for the clarity & vision of my directors Gayatri and Pushkar. The passion they possess for the story and the sparkle in their eyes every day that we were on set, was a silent motivation for me to give it my best as Vedha”, he said.
Saif also sent out a statement, in which he said, “Pushkar & Gayatri are quite the dynamic duo with great creative energy and it’s been very rewarding working with them. A complete icing on the cake and elevating experience for me was working with Hrithik and doing some intense action scenes”.
The directors described their experience of working on the movie as “exhilarating” and said they have been able to achieve what they had envisioned in the script. “We can’t wait to show our film to the audiences”, they said.
“It’s been an exhilarating experience shooting with the leading superstars of our country Hrithik & Saif. With our super talented and amazing crew, we’ve been able to achieve what we had envisioned at a script level. We can’t wait to show our film to the audience”.
Vikram Vedha, based on the folktale Vikram Aur Betaal, is all set to release on September 30, 2022.