Sangrur: 100-days of govt in Punjab as AAP face their first big challenge, A boon or bane for Mann?

Sangrur by Polls: The activities regarding the Sangrur by-election have reached a peak. Leaders of all political parties have put full emphasis. 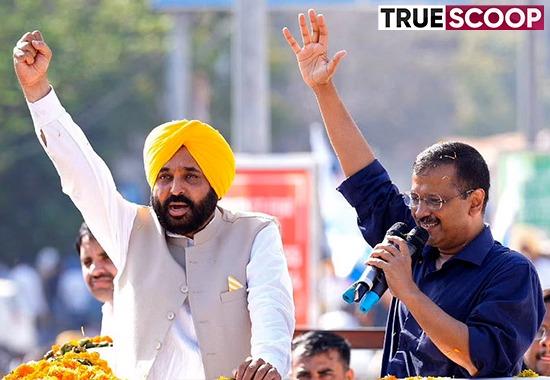 Sangrur by Polls: The activities regarding the Sangrur by-election have reached a peak. Leaders of all political parties have put full emphasis. In this by-election, the Aam Aadmi Party is under pressure and the prestige of Chief Minister Bhagwant Mann is at stake.
CM Mann has to make full efforts. The ruling party has always dominated the by-elections in Punjab, but the Aam Aadmi Party, which reached the assembly with a record victory of 92 MLAs three months ago, is not looking to take any risk in the Sangrur Lok Sabha by-election. This is the reason that despite being Chief Minister Bhagwant's home area, he is holding fast public meetings and road shows here.
So far, no party has been fielding senior leaders in the by-elections to be held in Punjab. This time, be it Aam Aadmi Party or Bharatiya Janata Party, everyone has thrown their senior leaders into the campaign. Delhi Deputy Chief Minister Manish Sisodia has campaigned for AAP candidate Gurmail Singh.
At the same time, Union Minister Gajendra Shekhawat visited BJP candidate Kewal Singh Dhillon. Chief Minister Bhagwant Mann is constantly camping in Sangrur. For the AAP government, this election remains a question of credibility. Chief Minister Bhagwant Mann himself has won the elections for two consecutive terms from the Sangrur Lok Sabha seat. The seat fell vacant after he became an MLA. Voting is to be held on June 23. The election campaign has reached its final stages. The content on this seat looks multi-cornered.
Also Read: Ludhiana: Pollution free water will be visible in Buddha Dariya by March 31, 2023
Apart from AAP candidate Gurmail Singh, Congress's youthful face Dalveer Goldy, BJP's Kewal Dhillon, Shiromani Akali Dal's candidate Kamaldeep Kaur Rajoana, besides Shiromani Akali Dal (Amritsar) Simranjit Singh Mann are in the fray. BJP engaged in preparations for the election of Sangrur Lok Sabha constituency, the names of two prominent leaders are in discussions for the candidate
Simranjit Mann raised concern
The matter of concern for the ruling party is that Simarjit Singh Mann of SAD (Amritsar) is also getting good support. Only Dhillon has contested the elections in 2019 on a Congress ticket. This time he has landed on a BJP ticket. Opposition parties are making law and order issues in the election campaign. The opposition parties are raising the issue of the murder of Sidhu Moosewala, who was very popular among the youth. Shiromani Akali Dal is trying to woo voters in their favour by making captive Sikhs an issue.
With the help of your attack on corruption
Aam Aadmi Party is focusing on combating corruption and decisions taken in three months. The Aam Aadmi Party is also more serious about this election because the opposition has nothing to lose after getting a crushing defeat in the assembly elections, while AAP has to lift the mountain of people's hopes due to taking 92 seats. This is the reason that as the election campaign is reaching its final stage, AAP is constantly emphasizing increasing its strength.
Returning Officer Jitendra Jorwal had earlier said there were 15,69,240 eligible voters -- 8,30,056 men, 7,39,140 women and 44 transgenders -- in the constituency. A total of 16 candidates -- 13 men and three women -- are in the fray. Polling will take place from 8 am to 6 pm on Thursday and the counting of votes will be taken up on June 26.
This will be the first major electoral battle for the Aam Aadmi Party (AAP) since it came to power in Punjab earlier this year. The AAP has fielded Gurmail Singh, the party's Sangrur district in charge, while the Congress has placed its bets on former Dhuri MLA Dalvir Singh Goldy in the bypoll.
BJP has fielded former Barnala MLA Kewal Dhillon, who joined the saffron party on June 4. Shiromani Akali Dal (Amritsar) chief Simranjit Singh Mann is also in the fray. Kamaldeep Kaur, the sister of Balwant Singh Rajoana, a convict in former Punjab chief minister Beant Singh's assassination case, has been fielded by the Shiromani Akali Dal (SAD).