He cited that because the water gets logged after rains, the ready crops get destroyed leaving farmers under utmost stress. Author : Guneet kaur 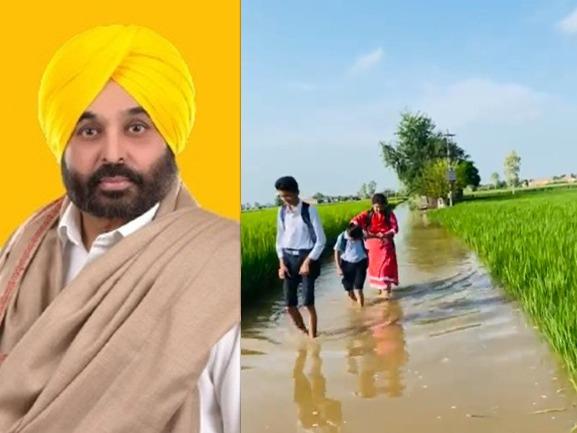 For the last many days, Punjab has received heavy rainfall in some of its parts which has led to a lot of problems for the common man. On the one hand, where common people are facing problems for day to day transportation due to water logging, on the other hand, small-scale farmers are facing the toughest times of their life as their ready crops have got destroyed. There are many people in the country whose stories and urges to the government go unheard.

Recently, an unknown person from Shahpur Kalan village of Sangrur district shared a video on his Twitter handle narrating the problem people of the village face every day due to water logging. The video is not from a famous account which is why it has not gathered much limelight till now.

The video shows students facing trouble while going to school as the water in the village has reached knee level. The water gets logged in the village due to the minimum facility of the drainage system. In the video, a person can be heard saying that from the time it has rained, they have been facing this problem. He further added that keeping the school children aside, most of the farmers living here are small scale whose whole income depends on their crops. He cited that because the water gets logged after rains, the ready crops get destroyed leaving farmers under utmost stress.

The person in the video urges Punjab CM Bhagwant Mann to help the village get out of this problem. He said that Sangrur is the constituency of Bhagwant Mann and now it needs the help of his party.

These are stories that are narrated to the mass but do not reach the right person. Hope that the AAP government in Punjab takes a serious step in this matter and find a solution to the problem of these villagers.

Please share this so that it can reach the administration and Aap government. No one has taken a single step so far. We hope AAP can change that. Thank you 🙏#punjab #AAP #sunam #EducationForAll@AroraAmanSunam @BhagwantMann @ArvindKejriwal pic.twitter.com/qeKKIKljOZ