Sarfaraz Khan pays tribute to Sidhu Moosewala with a 'signature move' after scoring a century; Watch

However, the young batsman looked a bit emotional after scoring a century and then paid tribute to Punjab singer Sidhu Moosewala, who was shot dead last month, with a special celebration. 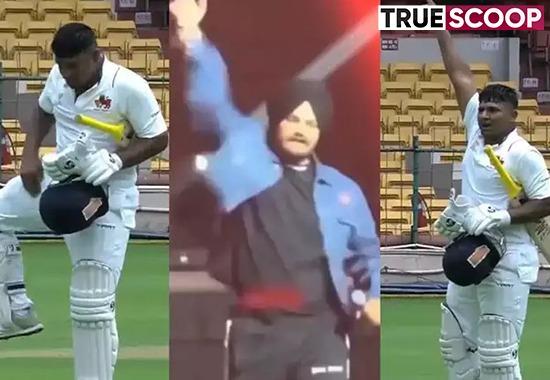 Ranji Trophy Final: Mumbai batter Sarfaraz Khan has shown tremendous form in the current Ranji season and keeping the same form, he also scored a strong century in the final match against Madhya Pradesh. However, the young batsman looked a bit emotional after scoring a century and then paid tribute to Punjab singer Sidhu Moosewala, who was shot dead last month, with a special celebration.
Sarfaraz Khan went out to bat on the first day of the final match. He returned unbeaten on the first day after scoring 40 runs. He batted brilliantly on the second day and completed his fourth century of the season, hitting a four in the fifth ball of the 114th over. He was dismissed for 134 runs in 243 balls with 12 fours and two sixes as Mumbai's first innings ended at 374.
Sarfaraz Khan appeared very emotional after scoring a century. He did Sidhu Muse Wala's popular signature "Thai Five" and paid tribute to him in a special way. The video of his celebration is becoming increasingly viral.
Also Read: Ranji Trophy Final: Sarfaraz Khan slams stunning 134; guides Mumbai to 374 against MP
Sarfaraz Khan has maintained the great form which he had shown last season, this season as well. So far this season he has scored 922 runs in eight innings at an extraordinary average of 153.66. Earlier in the 2019-20 Ranji season, he had scored 928 runs in six matches at an average of 154.66. The biggest feature of Sarfaraz is the ability to play long innings, this season also his most centuries have been converted into big scores.
With his stellar performance, this batsman is continuously presenting a claim to make a place in the Indian team. It has to be seen when the selectors give Sarfaraz a chance.
Watch Viral Video: