All schools in the national capital will remain closed until further orders in the National Capital Region and Adjoining Areas, owing to the rising levels of air pollution in the city. 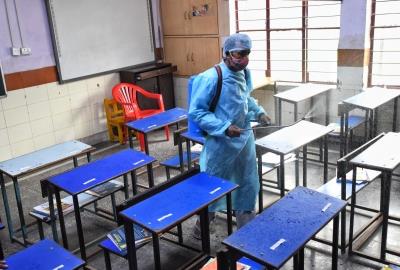 All schools in the national capital will remain closed until further orders in the National Capital Region and Adjoining Areas, owing to the rising levels of air pollution in the city.

As per a directive by the Education Department, all the government, government aided, unaided recognized, NDMC, MCDs and Delhi Cantonment Board Schools will remain closed.

However, online teaching learning activities and the examinations for board classes would be conducted as per earlier guidelines.

The residents of the national capital continue to breath polluted air as air quality in the city was recorded under 'very poor' category on Sunday morning.

The System of Air Quality and Weather Forecasting And Research (SAFAR) said the Air Quality Index (AQI) in the national capital was 324 for PM10 and 200 for PM2.5. As PM10 went over 300, the department has issued a health advisory asking people with heart or lung diseases, older adults, and children to reduce prolonged or heavy exertion. The PM2.5 level was found to be under the 'very poor' category.

According to the SAFAR forecast, the pollution levels are expected to deteriorate further in the next 24 hours with PM10 likely to be at 356 and PM2.5 at 220.

Earlier on November 13, Chief Minister Arvind Kejriwal had announced to shut down physical classes in schools for a week. "This measure would particularly protect the children from inhaling toxic air," the CM had said then.