Security bolstered around ED office ahead of Rahul's appearance

Security around the Enforcement Directorate (ED) office here has been beefed up ahead of Congress leader Rahul Gandhi's scheduled appearance on Monday for questioning in the National Herald case. 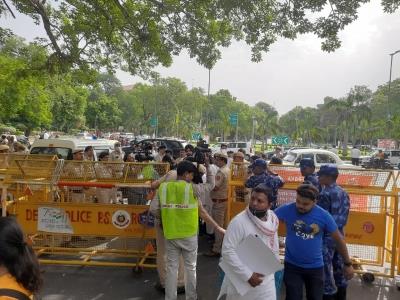 Security around the Enforcement Directorate (ED) office here has been beefed up ahead of Congress leader Rahul Gandhi's scheduled appearance on Monday for questioning in the National Herald case. Paramilitary forces have been deployed around the ED office in Pravartan Bhawan, APJ Abdul Kalam Road in Lutyens Zone as a precautionary measure. Extra police teams have also stationed to keep a vigil on people visiting the nearby areas, lanes. Mr Gandhi was summoned twice in the case. He had earlier written to the national agency that he was abroad and it was not possible for him to join the probe. This morning, he is all set to join the probe and is likely to reach the ED's headquarters to get his statement recorded. Every vehicle going towards Abdul Kalam Azad Road is being stopped and its occupants questioned. Several Congress workers were detained from outside the AICC headquarters in 24 Akbar Road in the morning where they had gathered for a proposed march to the ED office with their leader.Heavy deployment of police were seen outside the AICC office and Rahul Gandhi's residence.Delhi Police on Sunday told the Congress party that their proposed march will not be permitted, owing to the security situation in the national capital."Keeping in view the present communal situation in Delhi and heavy law and order/VVIP movements in the jurisdiction of New Delhi district... The said rally could not be permitted in the jurisdiction of New Delhi district," Deputy Commissioner of Police Amrutha Guguloth said in a letter to the AICC.The police also noted that a call was given to the Congress supporters all over India to join the march.
Denying permission, the senior official requested the party to cooperate with the police.