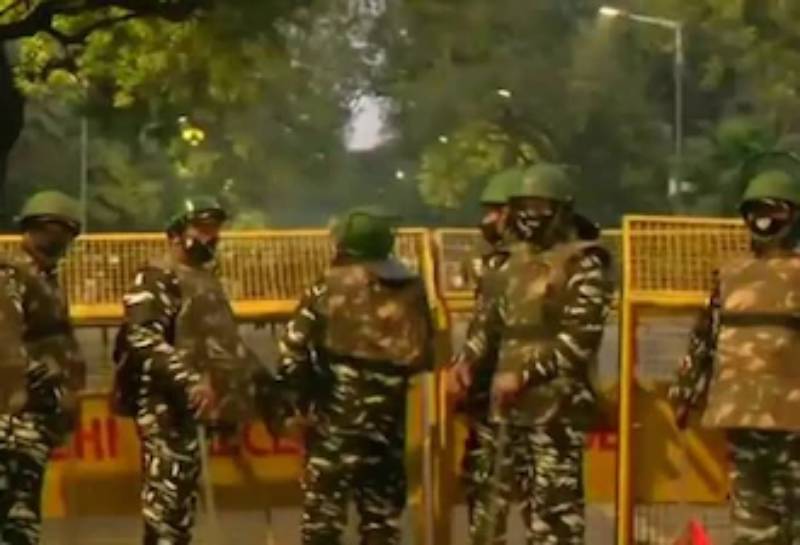 A low intensity explosion occurred near the Israel Embassy in the national capital on Friday. Delhi Police said that the explosion took place at the roadside of 5 Aurangzeb Road in the heart of the city. Fire brigade, SWAT and forensic teams rushed to the spot soon after the incident that took place at around 5 pm. "We are looking into the matter. Multiple police teams have been rushed to the spot. It is yet to be ascertained the kind of material that exploded," said a senior police officer.

As per fire department information, they received the call at 5.11 pm, and three fire tenders were pressed into service. The window panes of a vehicle parked nearby were damaged. Delhi Police Special Cell has also obtained a CCTV footage showing a car dropping off two persons who walk towards the spot near the Israel Embassy where a minor explosion took place on Friday evening.

Intelligence Bureau chief Arvind Kumar and Delhi Police Commissioner S.N. Shrivastava had briefed Union Home Minister Amit Shah about the 'low-intensity blast' that took place in the heart of the national capital on Friday. "The investigation into the blast is being monitored. Nothing can be ruled about as of now," said a senior IB official.

The blast took place even as there was heightened security in the area owing to the Beating Retreat ceremony, which culminates the four-day-long Republic Day celebrations at Vijay Chowk. On February 13, 2012, a terror attack occurred in Delhi when a sticky bomb was placed on the car of Tal Yehoshua Koren, the wife of the Israeli diplomat, in which she had received injuries. Delhi Police had then arrested journalist Syed Mohammad Ahmad Kazmi for aiding bike-borne bombers who are yet to be caught.

The blast put questions on the security arrangements in the capital city and in the area where usually high security is maintained, Jaish-ul-Hind has claimed responsibility for the blast now. The CSIF has put on alert all the airports, nuclear and aerospace stations, Delhi metro and union government buildings among others. Central intelligence agencies have found a chat on Telegram where Jaish-ul-Hind has claimed responsibility in a suspected channel on the platform.

The team of investigators from Israel could arrive in New Delhi as early as Saturday to assist Indian agencies in the probe over the blast in which some cars were damaged in the high-security zone of Lutyens' Delhi.

The driver of the vehicle has been traced and sketches of the two people are being prepared. A probe has been initiated to ascertain their involvement in the blast. A letter has also been recovered from the site of blast that mentions the explosion was just a "trailer". Sources said that the letter also mentions Iran's General Qasem Soleimani and top nuclear scientist Mohsen Fakhrizadeh as "martyrs".

Both were assassinated last year. Soleimani was killed near the Baghdad International Airport in a drone strike ordered by then US President Donald Trump on January 3. Friday's blast took place 1.4 km from Vijay Chowk, where the President and Prime Minister and other senior members of the government had assembled for the Beating Retreat ceremony. A high alert has been sounded in the capital and security at the airport and other strategic locations have been intensified.

The situation remains tense because earlier on January 26, when the farmers tractor parade run amok, one section of the farmers entered Red fort and hoisted two of their flag on Republic day. However, it is a known fact that police usually makes tight security arrangements and there can never be any room of mistake or lapses because one wrong strategy or loose arrangement can lead to any untoward situation because India faces threat from Pakistan. Infiltrators try to enter the border every day through India's borders with Pakistan. Terror threats are also common.

There is a need to own up responsibility and make tight arrangements. Miscreants or terror organizations can see unrest in Delhi as an opportunity to inflict terror. The government and police cannot abdicate their responsibility.