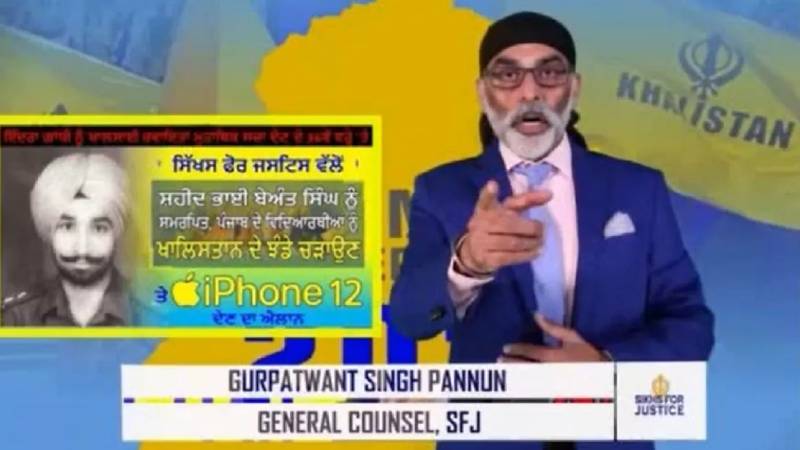 Banned secessionist group Sikhs For Justice (SFJ) has been continuously trying to woo people to support its anti-India agenda through different means. In its illegal exercise, the group has now offered iPhone-12 to students for raising Khalistan flag on October 31 -- the death anniversary of former Prime Minister Indira Gandhi.

Central agencies have alerted Punjab after they got inputs that the SFJ has given a call to the students in the state to raise Khalistan flag in schools, colleges and universities there on October 31.

The group has adopted the new technique to commemorate the 36th martyrdom year of Beant Singh, the assassin of Indira Gandhi.

The video message also urges the students of Punjab to converge at Akal Takht Sahib on October 31 to participate in Shaheedi Samagam Ardas in honor of Shaheed Beant Singh.

On July 5 this year, the MHA blocked access to 40 websites launched by SFJ for voter registration of people living in Punjab and also removed the Voter Registration app from Google play store.

Riding the wave of popular sentiment on anti-farmer bill, the group earlier this month also tried to woo Punjab farmers and announced a reward of $10,000 for hoisting Khalistan flag at Shambhu toll plaza at Punjab-Haryana border during farmers rally.

The SFJ is trying to fish in troubled waters. It the process, it collected applications and data from farmers of Punjab and Haryana from October 1-8 to distribute $1 million among those who are defaulting in agricultural loan payments but it could not succeed in its efforts.

Attributing the roots of Modi's land-grabbing policy as a legacy of "British Raj", the SFJ had launched a dedicated portal in British cyber space to distribute $1 million among farmers of Punjab and Haryana.

Through the British portal www.khalistan4farmers.uk, the group also sought applications for Rs 5,000 monthly grants from farmers of Punjab and Haryana who own less than 5 acres of land and have defaulted on their agricultural loans.

The SFJ had earlier announced to hold its 'Referendum-2020' campaign in November this year. In September beginning the group had offered Rs 3,500 each as grant on monthly basis to woo Punjab farmers ahead of its anti-India 'Referendum-2020'.

Based on the NIA's recommendation regarding ongoing anti-India activities of the SFJ, the Ministry of Home Affairs had, in the beginning of September, ordered attachment of properties of SFJ's key leaders -- Gurpatwant Singh Pannun and Hardeep Singh Nijjar.

Pannun is the SFJ's General Counsel while Nijjar is 'Referendum 2020' Canada coordinator.

The NIA said that the SFJ, headed by Pannun, is presently making efforts to propagate the 'Referendum-2020' on social media.