SGPC marches for the release of captive Sikhs across the state

SGPC will also have a protest march on August 15 Author : Samriti Bharadwaj 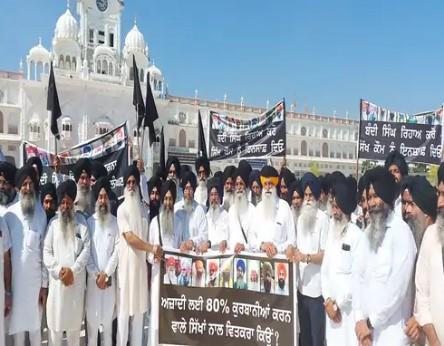 The Shiromani Gurdwara Parbandhak Committee (SGPC) has exacerbated the battle for the release of captive Sikhs. On Saturday, a fury march has been taken out in the district headquarters by the SGPC across Punjab and the Deputy Commissioners were given a demand letter in the name of Prime Minister Narendra Modi demanding the release of the captive Sikhs.

Following that, the SGPC will have a protest march on August 15. The SGPC officials and employees participated in the protest march under the leadership of SGPC Principal Advocate Harjinder Singh Dhami and showed their rage by wearing black dastar.

The march started from Shri Darbar Sahib and went through a number of markets before arriving at the DC office at the Mini Secretariat. Here the SGPC officials gave a demand letter to SDM-2 Harpreet Singh.

The government has been delaying justice for a long time, according to SGPC Principal Advocate Harjinder Singh Dhami, which indicates that the administration does not want to give justice. They are not interfering in this, they are just asking for their rights.