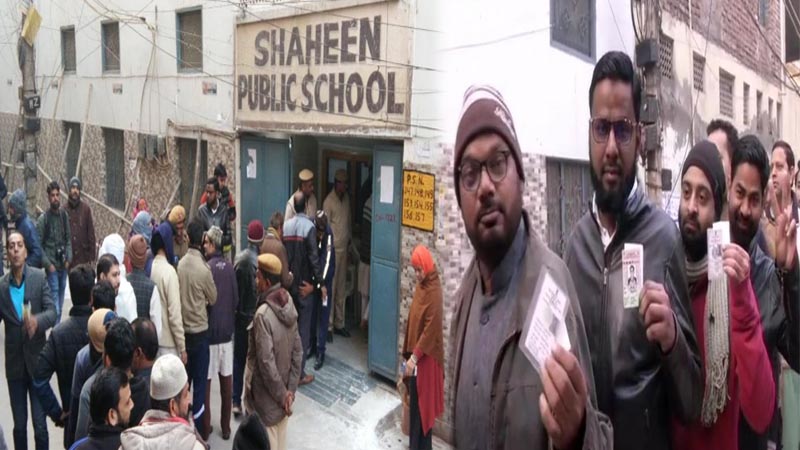 Shaheen Bagh, minority- dominated area falls in the Okhla constituency. The campaign for the Delhi election was widely polarising, however, it was evident that BJP tried to portray the protesters of Shaheen Bagh as "traitors" and "anti-national."
Amidst all this, the place has been a massive flashpoint between AAP, BJP and Congress.

AAP's Amanatullah Khan is the sitting MLA in this area and also the 2020 party's candidate contesting against Congress's Parvez Hashmi and BJP's Brahm Singh Bidhuri.

An eminent news agency asked the natives while they were waiting queue to cast their vote at the Shaheen Bagh Public School, a woman said, "I am voting for India and its Constitution. We are citizens of India."

Also Read: PM Modi in Assam: Bodo agreement is historic. No one wanted to touch it but we did

When a woman was asked after exercising her vote she said, "I feel people this time are voting for national issues. There are no local problems, water or electricity issues in our area. People should come out and vote."

However, all five polling stations in Shaheen Bagh have been declared ''critical'' by Delhi's Chief Electoral Officer and has been packed with tight security.

In the 2015 election, AAP came into power with majority by winning 67 of Delhi's 70 seats. The BJP won three and the Congress, none.

Shaheen Bagh in south Delhi gained nationwide attention due to the protest, mainly by Muslim women, against the Citizenship Amendment Act (CAA), which enables Indian citizenship for non-Muslims from Pakistan, Afghanistan and Bangladesh if they ran away from religious persecution and entered India before 2015.

It is believed by the protesters that the law discriminates against Muslims, and along with the National Register of Citizens (NRC) to identify illegal immigrants, could be used to target undocumented Muslims.

Get the latest update about NRC, check out more about Shaheen Bagh Polarised For Campaign, true scoopNews, Sit In Protest at Shaheen Bagh & Anti CAA