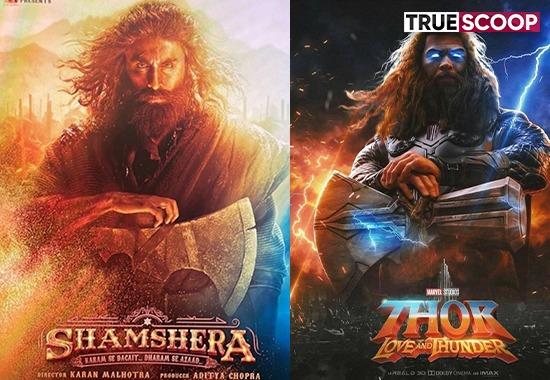 The movie 'Shamshera' starring Ranbir Kapoor, Vani Kapoor and Sanjay Dutt is one of the most awaited movies of the year 2022.  Seeing its craze among the viewers, the makers had recently released its teaser. On the other hand, Ranbir Kapoor's look has also come to the fore from Shamshera.
In this poster, Ranbir Kapoor is looking quite scary. The poster of the film has not been released officially. It is being claimed on social media that the poster of the film has been leaked even before its release. However, it is being speculated that this may not be an official poster but a fan-made poster. Significantly, the film will hit theatres on July 22.
The poster is becoming increasingly viral, now this poster is becoming increasingly viral on social media. Some are praising Ranbir Kapoor after seeing this poster, while some are comparing Ranbir Kapoor's look with the poster of Thor: Love and Thunder. Many fans felt the bearded look of Ranbir was similar to Yash’s look in the Kannada blockbuster franchise KGF. “This has such Rocky Bhai from KGF vibes,” wrote one fan. However, several other fans wrote that Ranbir will outdo Yash in this look and make it his own.
Also Read: Ranbir Kapoor's 'Shamshera' leaked look sends fans into a frenzy; 'Can't wait to see the movie'
Recently, the makers released the teaser along with the release date of the film. The nearly one-minute monochromatic teaser featured the three actors sitting in the centre of a dimly lit space surrounded by arms. In this teaser, Sanjay Dutt is heard saying in Hindi, "This story is of the one who said that slavery of anyone is not good, neither of others nor our close people." Vani Kapoor further says, "This story belongs to the one who dreamed of freedom in his father's legacy."
Then we get to see a glimpse of Ranbir Kapoor, who says, "But no one gives you freedom. You have to win it. Karam se dacoit, dharma se azaad Shamsher!" Though there is no official confirmation about the story of the film, earlier reports have claimed that it is based on the story of dacoits of pre-independence India.
This appears to be true after watching the teaser. The film, directed by Karan Malhotra, is described as a period action drama film, which will see Ranbir playing a dual role as both a father and a son. The film also stars Ashutosh Rana, Saurabh Shukla and Ronit Roy.