My oh My! Shawn Mendes and Camila Cabello call it quits

"Will continue to be best friends," the two singers said in a joint statement. 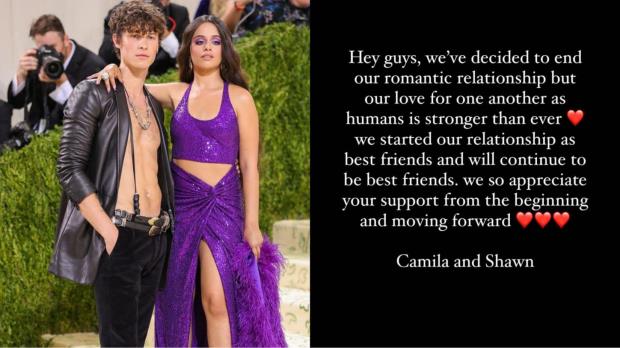 Shawn Mendes and Camila Cabello have decided to end their romantic relationship but "will continue to be best friends." In identical statements on Thursday, the two pop stars revealed that they had decided to call it quits and announced the news on their respective Instagram pages.

Where the fans shipping them together are shocked and broken-hearted, they come in support of their beloved celebs.

Camila took to her Instagram page to pen down a note. "Hey guys, we've decided to end our romantic relationship but our love for one another as humans is stronger than ever we started our relationship as best friends and will continue to be best friends. we so appreciate your support from the beginning and moving forward. Camila and Shawn." 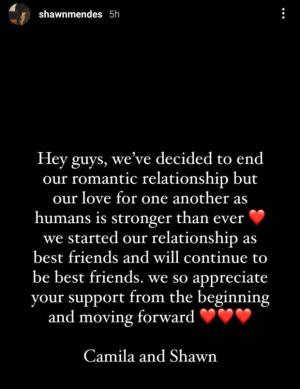 Shawn also issued the same statement announcing his split from the singer.

After years of friendship, Canadian singer Mendes began dating Cuban-American singer Cabello and went public with their relationship on July 4, 2019.

Both stars released their first duet, "I Know What You Did Last Summer," in 2015, and their second collaboration, "Senorita," in June 2019, just before embarking on their romantic relationship. The latter song even made it to the top of the US Billboard Top 100.

The stars were recently seen having a blast celebrating Halloween together. These amusing photos and videos were shared on their Instagram accounts by the two.

Camila made her acting debut in the romantic musical film Cinderella in 2021, in which she played the title role.