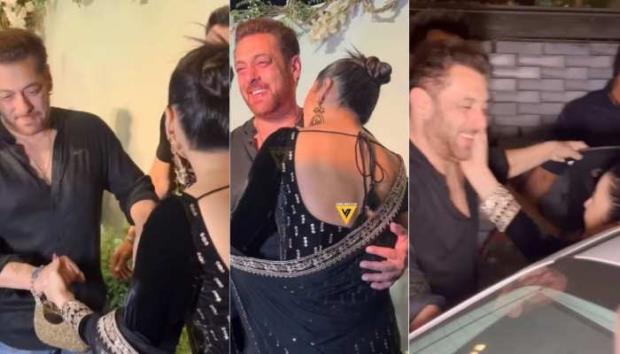 Salman Khan Shehnaaz Gill Video: Shehnaaz Gill arrived to attend Salman Khan's sister Arpita Khan's Eid party. During this, she had a lot of fun with Salman as well as Dabangg Khan was also seen pampering the actress a lot.
Salman Khan Shehnaaz Gill Eid Celebration: Arpita Khan Sharma, sister of superstar Salman Khan, organized a grand party at her house on the occasion of Eid. All the big stars of Bollywood attended this party.
However, Shehnaaz Gill was in the highest limelight. Gill arrived at this party wearing a very beautiful black suit and now many videos of Shehnaaz are going viral on social media. At this party, Shehnaaz Gill had the most fun with Salman Khan.
Salman-Shehnaaz Video
During the photo op, Shehnaaz Gill clicked a lot of pictures with Salman Khan and during this, she and Salman were also seen hugging each other and talking a lot. This bonding between her and Salman is being liked by everyone.
Also Read: Kangana Ranaut reveals dark secrets of Bollywood; says, ‘sexual exploitation’ common in industry
Shehnaaz made this demand from Salman A video of her and Salman is becoming the most viral on social media, in this video, Gill is seen pulling Salman Khan's hand at Eid's party and says that she pretends to Salman to leave her.
Moreover, Salman is also seen pampering Katrina of Punjab and goes to drop her even in the car. Salman sends Gill back in the car and then he goes back to Arpita's house.
Shehnaaz can be seen in the film with Salman
A video of Shehnaaz has surfaced on social media, Shehnaaz Gill is seen saluting the photographers. Shehnaaz Gill has been seen in a traditional black colour outfit during this time.
Significantly, Gill can be seen in Salman Khan's film 'Kabhi Eid, Kabhi Diwali'. At the same time, Salman Khan liked Shahnaz Gill's bubbly nature in Bigg Boss season 13.