Shehnaaz is dancing to Ali Seth and She Gi starrer song 'Pasoori', looking at the sky as if looking for something, sometimes she is expressing that emptiness with her eyes. 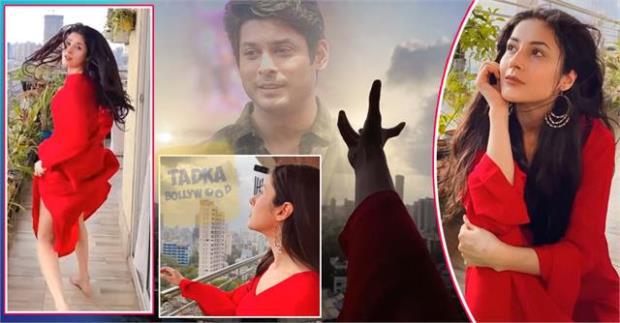 Shehnaaz Gill Pasoori Song: When pain is associated with the heart, it is visible in the eyes. With time, even though the wound gets coated and it reduces our sorrow, if you scrape, that wound also becomes green.
Something similar is the case with Shehnaaz Gill of Bigg Boss 13. Even though Shehnaaz has learned to live again after the death of her love and special friend, and the laughter has returned to her lips, on many occasions, the desolation she sees in her life.
The emptiness in Shehnaaz's eyes is still visible even today, which came due to the departure of Sidharth Shukla. We are not saying this just like this, the video that Shahnaz shared recently is proof of this.
Through this video, she has expressed her heart. Shehnaaz is looking for her love with her arms extended towards the sky. In the video, Shehnaaz is dancing to Ali Seth and Shae Gill starrer song 'Pasoori', looking at the sky as if looking for something, sometimes she is expressing that emptiness with her eyes. Who must have pricked her heart by becoming a tease?
Also Read: Deepika Padukone shows off her 'Yoga Flex' on various yoga asanas: Husband Ranveer Singh reacts
It seems that Shehnaaz is looking for someone moment by moment and that thing is somewhere in nature. The lyrics of the song- ' Aa lekar chale Tujhe .. hai Jahan silsila .. Tu hai wahi hai Teri kami... bana de sajja de panah de humse...' are openly telling the heart of Shehnaaz.
Sidharth Shukla passed away from the world on 2 September 2021. He died of a heart attack. Shehnaaz was very close to Sidharth Shukla. The two first met in Bigg Boss 13. The friendship of both took such a form that even the hashtag of their name was made. People also would have liked to see this pair, popularly known as Sidnaaz, together.
Shehnaaz Gill was completely broken after Sidharth's departure, but now with time, Shehnaaz has come back strongly but the pain is alive in her chest. Talking about the work front, there are reports that Shehnaaz is going to be seen in 'Kabhi Eid Kabhi Diwali' with Salman Khan. Apart from this, she is also very active on her YouTube channel. She often shares her life-related blog with fans.