Sheikh Hussain made controversial remarks about PM Modi during a protest outside the Enforcement Directorate office in Nagpur, Maharashtra. 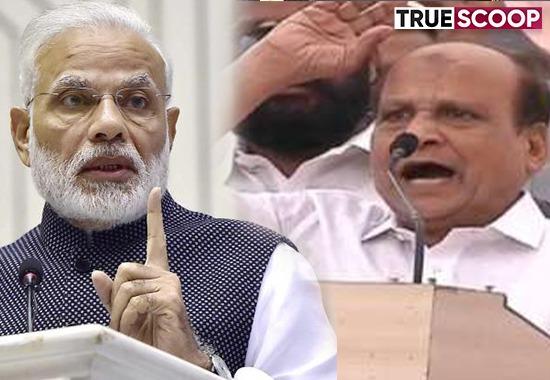 Sheikh Hussain Derogatory Remarks: Congress leader Sheikh Hussain has made objectionable remarks against Prime Minister Narendra Modi. He has wished for the death of PM Modi. Sheikh Hussain made controversial remarks about PM Modi during a protest outside the Enforcement Directorate office in Nagpur, Maharashtra.
Sheikh Hussain has been the state president of the Nagpur Congress. Sheikh Hussain increased his troubles by making a controversial statement against PM Modi. According to the news source, an FIR has been registered against him. The Gittikhadan police station filed a complaint under sections 294 and 504 of the IPC. The Nagpur unit of the BJP objected to the objectionable remarks made by Hussain and said that they would file a police complaint.
Former Congress president Rahul Gandhi appeared before the Enforcement Directorate (ED) on Wednesday for the third consecutive day in a case of alleged money laundering related to the National Herald newspaper and is being questioned by the investigating agency.
Also Read: Tibetans hopeful of seeing Modi hosting Dalai Lama
Rahul Gandhi reached the ED headquarters located on APJ Abdul Kalam Road in central Delhi at around 11.35 am with the security of the "Z plus" category of CRPF personnel. He was accompanied by his sister and Congress General Secretary Priyanka Gandhi Vadra.
Police and paramilitary personnel have been deployed in large numbers around the Federal Investigation Agency's office and prohibitory orders under Section 144 of the Criminal Penal Code (CrPC) are in force. The ED had questioned the Congress leader for over 11 hours on Tuesday and more than 10 hours on Monday.
The investigating agency had asked Rahul Gandhi to appear today as well. Congress leaders and workers also protested on the third day of the ED's interrogation of Rahul Gandhi, after which the police took several people into custody. Police have imposed section 144 in the area adjacent to the Congress headquarters.