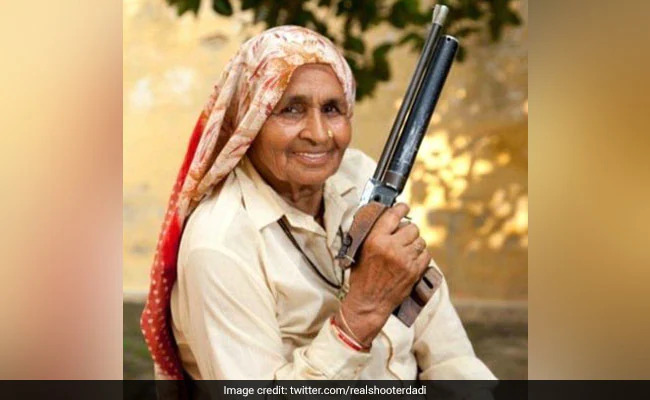 Due to COVID-19, veteran shooter Chandro Tomar, also known as "Shooter Dadi (grandmother)," died. She was 89 years old at the time. Chandro Tomar was recently admitted to a hospital in Meerut.

Chandro Tomar, a native of Baghpat, Uttar Pradesh, began competitive shooting at the age of 65. Throughout her career, she won over 30 national championships and many other competitions.

Prakashi Tomar, her sister-in-law, is also one of the world's oldest sharpshooters.

Ms. Tomar was a Twitter star with hundreds of thousands of followers.When she revealed her illness on Twitter, a number of politicians, Bollywood stars, and celebrities wished her well.
Her death has been mourned by people from all walks of life, from Union ministers to film actors.

Union Minister Hardeep Singh Puri tweeted, "An epitome of gender equality and champion of women's rights Smt Chandro Tomar, known as 'Shooter Dadi' by her fans and admirers is no more. The courage with which she challenged patriarchy and took up shooting as a sport will inspire generations to come. Condolences to her family".

Tapsee Pannu and Bhumi Pednekar played the lead roles in the 2019 Bollywood film "Saand Ki Aankh," which was inspired by their lives.

The actors paid their respects to the seasoned gunman.

The sad news comes on the heels of the deaths of senior journalist Rohit Sardana and Bihar Chief Secretary Arun Kumar Singh, both of whom died as a result of Covid complications.

On Friday, India recorded the highest-ever number of deaths in the last 24 hours, with 3,498 people dying as a result of the more deadly second wave of coronavirus infections. In addition, the country reported 3,86,442 Covid cases, the highest number since the outbreak began.