Moosewala said that he was delighted to join Congress.

Welcoming in the party fold, CM Channi said that it is a matter of sheer pride and honour for the people of state that Sidhu Moosewala, who comes from a family with humble background as his father Bhola Singh is an ex-serviceman and mother Charan Kaur, the Sarpanch of the village. He said that Moosewala being a heart throb of millions of his fans across the globe would prove to be an asset for the party as he was connected with the grassroots. He said that Moosewala with his new assignment after entering the arena of politics would serve the people zealously, the way he earned name and fame in the world of music by the dint of hardwork. 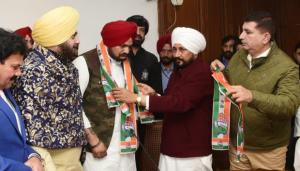 Earlier, speaking on the occasion PPCC Chief Navjot Singh Sidhu said that Moosewala created ripples in the Punjabi music with his ever-growing popularity world over especially amongst the youth. Sidhu said that his unbounded talent of singing with huge following would follow the footsteps of his parents to serve wholeheartedly for the cause of mankind.

Expressing gratitude to CM and PPCC President, Moosewala said that he was delighted to join Congress as it was the only political party which offers a healthy platform especially to ordinary people with modest background to serve the society diligently.