Condoling the death of noted singer late Shubhdeep Singh alias Sidhu Moosewala, the Punjab Chief Minister Bhagwant Mann today said that the demise of young singer was a huge and irreparable loss for the family and fans. 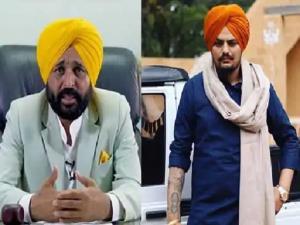 Condoling the death of noted singer late Shubhdeep Singh alias Sidhu Moosewala, the Punjab Chief Minister Bhagwant Mann today said that the demise of young singer was a huge and irreparable loss for the family and fans.
In a condolence message that was handed over to the aggrieved family by Cabinet Minister Dr Baljeet Kaur, on behalf of Chief Minister, during Bhog and antim ardas of departed singer, the Chief Minister said that the untimely and tragic demise of the young artist has given shock to his fans spread across the globe. He said that the state government is fully with the bereaved family members in this hour of crisis. Bhagwant Mann said that the entire state government pays tribute to the blessed singer who has carved a niche for himself in the vast field of music and entertainment.
The Chief Minister said that death of a young son is a whopping loss for the family adding that the void created in music industry with death of Sidhu Moosewala will hardly be filled in coming future. He said that the talented singer’s Punjabi songs transcended every border and made every Punjabi proud on him. Likewise, Bhagwant Mann said that the young singer also made his native village famous in every nook and corner of world.
The Chief Minister said that though Sidhu Moosewala was a globally acclaimed singer but he remained firmly connected with his roots and continued to live with his family in their ancestral village. He said that Sidhu Moosewala served his family and society zealously adding that his life will always inspire the youngsters to scale new heights in life. Bhagwant Mann prayed to Almighty to grant eternal peace to departed soul and courage to family members to bear this huge loss.
Also Read: After 7-days Lawrence Bishnoi denies killing Sidhu Moose Wala, who is the real culprit? Police yet to catch 'Killer'
Meanwhile, Cabinet Minister Dr Baljeet Kaur accompanied by MLAs Gurpreet Singh Banawali, Balkar Sidhu, Gurmeet Singh Khudian and Narinder Kaur Bharaj shared the grief with the family on behalf of the Chief Minister.