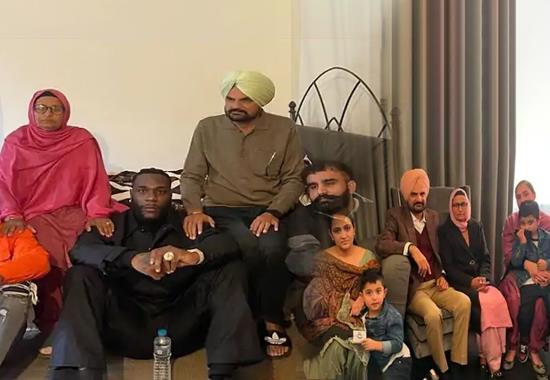 Sidhu Moosewala’s parents have recently gone to the UK in order to participate in candle marches and demonstrations being held there to seek justice for slain Punjabi singer. While seeking justice for his son, Balkaur Singh along with his wife also met Rupinder Kaur Sandhu, wife of Kabaddi player who got killed in Nakodar. Not only this they even met rapper Barna Boys who were on the verge of signing a collaboration with their song.

Sidhu Moosewala’s father Balkaur Singh and mother Charan Kaur left on Friday for UK to meet supporters of their son and seek justice along with them. This is for the first time that both of them have travelled to UK post their son’s death. While the pictures of their UK visit are going viral and in some of them it can be seen that both of them also met wife and family of deceased Kabaddi player Sandeep Nangal Ambian. The kabaddi player was shot dead openly during a match in Nakodar after which his wife has been seeking justice for her husband. His wife stated earlier that SSP of Jalandhar has been informed about her husband’s murderer and she wants that he should get justice as soon as possible.

Talking about meeting Burna Boys, Sidhu Moosewala parents met the Canadian rapper as he was on verge of collaborating with their son for an album.