Sikh outfits like SFJ may target other cities in Punjab: Intel

Ahead of assembly elections in Punjab, intelligence agencies have warned that Sikh militant outfits like Sikh For Justice (SFJ), Babbar Khalsa may hit other cities with terror activities in the state, sources in the security set up said. 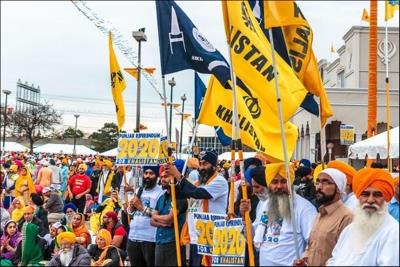 Ahead of assembly elections in Punjab, intelligence agencies have warned that Sikh militant outfits like Sikh For Justice (SFJ), Babbar Khalsa may hit other cities with terror activities in the state, sources in the security set up said.
The source said that these militant outfits have been actively supported by Pakistan's Inter- Services Intelligence (ISI) which is instigating them to disturb peace and harmony in the poll bound state.
The agencies have also advised the state administration to remain on high alert and keep strict vigil across the state while the Border Security Force (BSF) has been asked to check the infiltration attempts at the western border with Pakistan in Punjab with special focus on the drone movements across the border.
Though the recent blast in Ludhiana on December 23 was cracked quickly and the key conspirator Khalistani terrorist Jaswinder Singh Multan, an active member of the SFJ was arrested by the Germany counter terror agencies but this incident has triggered an alarm bell in the security establishment, the officials known to these developments said.
The intelligence agencies have also received input that many of the active members of the SFJ and Babbar Khalsa are tasked by the ISI to carry out more terror attacks to destabilize Punjab in the run up to the assembly elections.
In Ludhiana blast incident, the probe agencies have also found that ISI is behind the blast and was in touch with Gagandeep Singh who was killed in the blast. During the probe, the investigation agencies found the role of SFJ members -- Harvinder Singh and Jaswinder Singh Multan, who are based in Germany. They were in touch with SFJ president Avtar Singh Pannu and SFJ office bearer Harmeet Singh.
The Indian probe agencies shared the evidence gathered in this case to the counter terror agencies in Berlin and after that Multan was arrested, the officials further said.
They also revealed that he has been promoting separatist activities and is said to be in constant touch with US-based SFJ president Avtar Singh Pannu and Harmeet Singh alias Harpreet alias Rana, who are pursuing separatist agenda of Khalistan through Sikh Referendum 2020.
Multan was instrumental in SFJ's separatist campaign in Germany and recently it was revealed that he was arranging consignment of weapons, explosives, hand grenades and ammunition from Pakistan, with the help of his Pakistan-based operatives-cum-arm smugglers with an aim to carry out terror activities in Punjab and other parts of India too.
Source IANS