Three Sikh recruits, working to join the US Marine Corps, fought for an emergency appeal in District of Columbia's federal court to get an immediate exemption to the Corps' boot camp rule of cutting their hair and shaving their beards. Author : Rakesh Behal 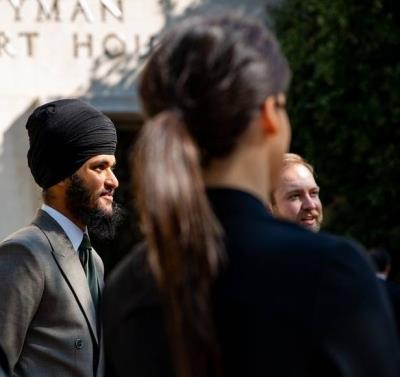 Three Sikh recruits, working to join the US Marine Corps, fought for an emergency appeal in District of Columbia's federal court to get an immediate exemption to the Corps' boot camp rule of cutting their hair and shaving their beards.

The three plaintiffs -- Aekash Singh, Milaap Singh Chahal and Jaskirat Singh -- want to attend Marine Corps basic training without having to shave their beards or forgo their traditional turbans during boot camp.

A three-judge panel expressed skepticism that the Marine Corps had a good reason to deny religious exemptions to its grooming standards but questioned why the plaintiffs required emergency relief, the Marine Corps Times reported.

No decision on the motion was made by the judges.

The trio had appealed to the US Court of Appeals for the D.C. Circuit in September after a lower-court judge denied their request for a preliminary injunction that would have allowed the men to enter boot camp with their articles of faith, the Marine Times reported.

In Sikh faith, men wear turban and they do not shave off their beards or cut hair.

The Marine Corps previously denied all these requests, due to which the trio for years have remained poolees -- an individual who has already signed up to become a Marine but has not yet left for the recruit training at boot camp.

"We continue to believe that the Marine Corps is doing a disservice to both our clients and itself in denying basic rights that are recognised by other branches of our military and under the US law," said Giselle Klapper, Sikh Coalition Senior Staff Attorney.

In April 2022, the Sikh Coalition -- a New York-based advocacy group, Winston & Strawn, the Becket Fund and BakerHostetler, with support from the Sikh American Veterans Alliance had filed suit against the US Department of Defence on behalf of the trio.

"Time and again, Sikhs in the US Army and Air Force -- along with military forces around the world -- have proven that their articles of faith pose no barrier whatsoever to capable military service," said Amandeep S. Sidhu, partner at Winston & Strawn LLP.

"Prohibiting Sikhs from joining the Marine Corps is out of step with the rest of our military, as well as the most basic values that our country holds dear," Sidhu added